does anyone else feel like 2020 and 2021 just crept along, mocking us by somehow having extra days and months that no one saw coming yet everyone felt? then january 2022 came ... and stayed ... and lollygagged ... and finally came to an end, only to have february shoot past like it barely happened?

for the first time in a long, long, long time, i feel cautious optimism about moving forward into a new year. from october until the end of january, we had so. much. stress. like ... every day and week brought something that felt like that jenga block that slides out easily but then sticks at the end, and the whole tower wobbles while you're stuck, able to neither move forward nor backward. but as february left the building, the universe lightened, and things felt ... better.

(i mean, ukraine notwithstanding. or all the anti-gay and anti-choice bills being passed and proposed. and my general anxiety and disgust at what is happening to this country. but still: spring is coming, hey?)

we've filled the past year with fun, take-your-mind-off-reality projects that are mostly finished, but there are a few loose ends to tie, and a new project on the horizon about which i'm currently obsessing.

the upstairs guest room is pretty much done, i just need to take real, good photos with the real, good camera. (and maybe get some new bedding. but let's not mention that to marc.) 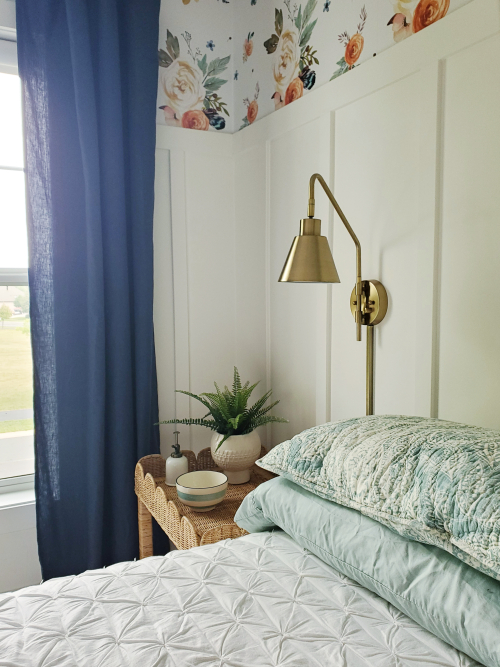 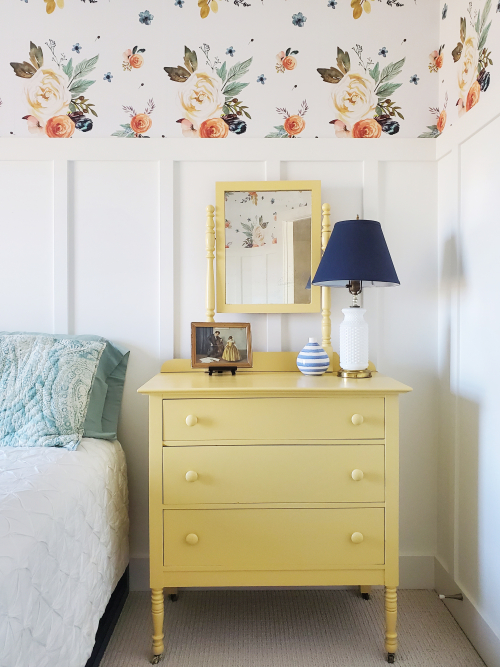 the basement guest room is done, with the exception of finding and hanging art. that's my spring project. 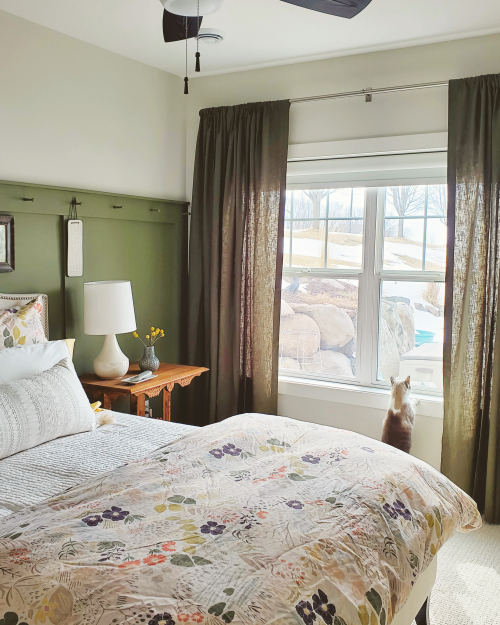 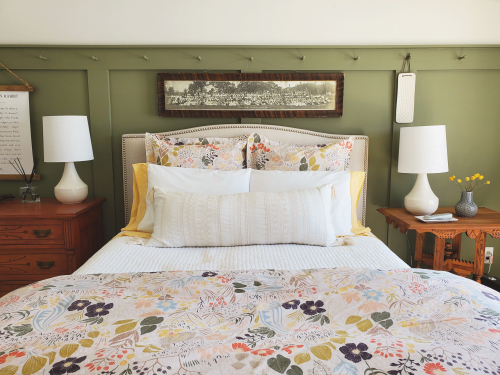 main floor bathroom is done, just hasn't been captured on the real camera yet, either. 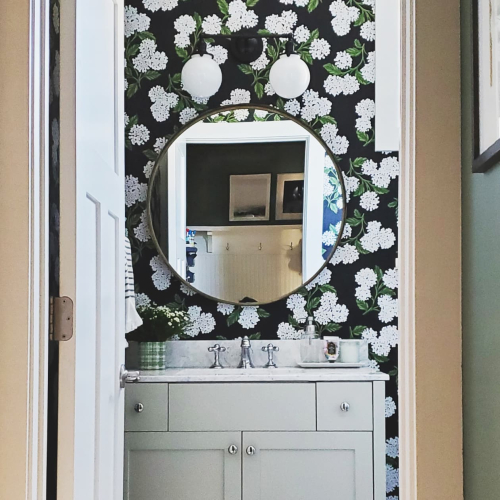 and now that the "final tweak" list is short, my mind has obviously turned to a new subject: 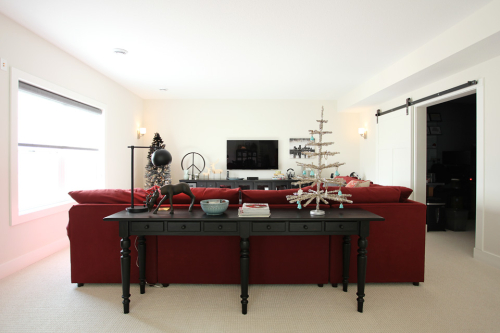 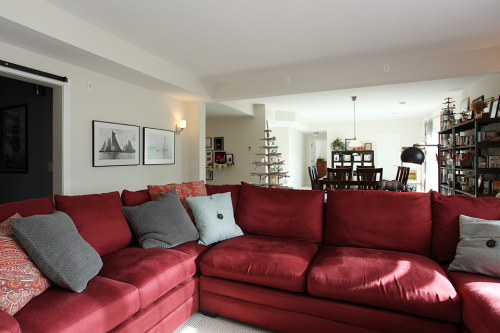 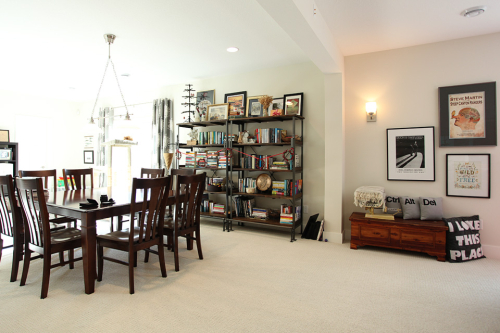 (yes, the last time i took photos of the basement was christmas 2015.)

the basement has not been a priority project for me on any level since we moved in. it holds all of our furniture from our last house, it's functional, it's comfortable. marc is down there daily to work, but i rarely visit. when company does come, it's a great place to hang out, play games, watch movies. both of our kids have filled it with friends on many occasions, but those days are waning, and we are starting to think ahead about this space.

marc has waited patiently for 10 years to put up surround sound and make the tv room of his dreams. last year on black friday, he finally put all of his research and collected best buy gift cards to use and purchased the hardware ... and it's all still in boxes in the corner. we were talking about those boxes the other day, and he pulled out a speaker to show me. turns out, they are all going to be larger and more, "hey! i'm a bunch of big black boxes on your walls!" than i'd anticipated, knowing literally nothing about surround sound. he then mentioned that maybe we need to revisit the idea of putting up a wall between the tv area and game area, to keep the sound more contained. and my brain was then off on spontaneous pro/con list making.

a wall would create separate spaces, so we could paint the tv room a dark color and hide the speakers.

the opposite side of the wall could be built-in storage cabinets, for all the small, seasonal storage that i've wished i had over the years.

a wall would help support the ceiling right in a spot where it has been determined to crack for the last few years.

couldn't think of a real con, to be honest.

we have a natural separation point between the two spaces, which you can see in the third basement photo above. that's right where we would put the wall. the game side of the room would stay relatively untouched; the biggest change would be a wall of cabinets. i'm inspired by these looks ... 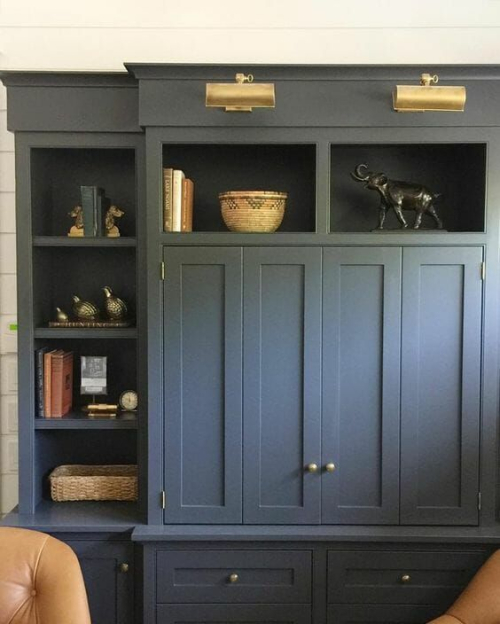 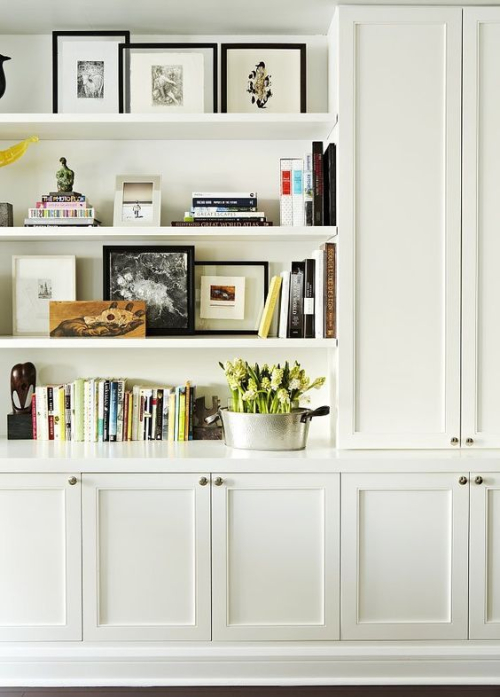 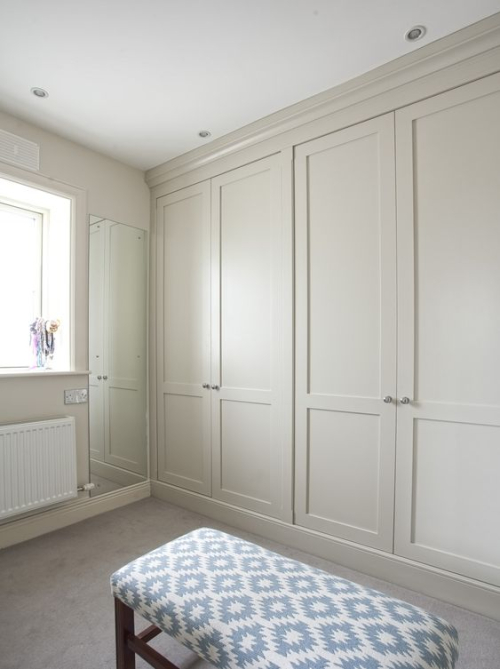 other than that, no big disruptions. the current table and chairs would need to downsize; i'm thinking a round table with four or six upholstered chairs ... something comfortable to sit in and hang out. it also hits a nostalgic spot for me, remembering my grandparents' house and the game table they had in their great room. the orange chairs were cozy, had low arms, and both swiveled and rolled. there was always a game or art project or puzzle happening at that table. changing the table would also mean changing the light above it, but we have an unused five-arm chandelier that should fit the bill, at least for the time being.

the biggest change would be on the other side of the wall. wanna see where my head is going? 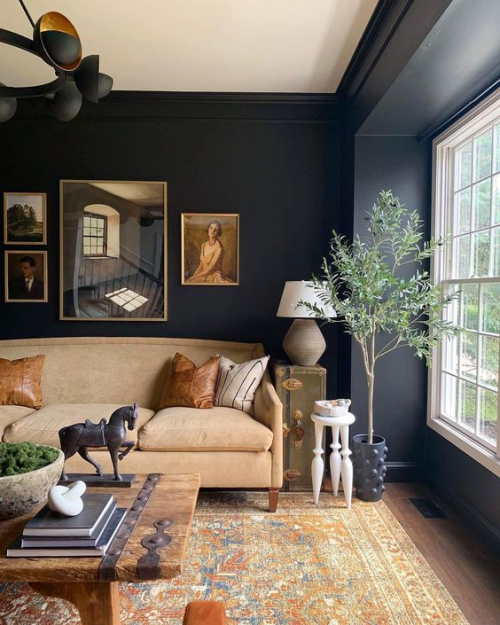 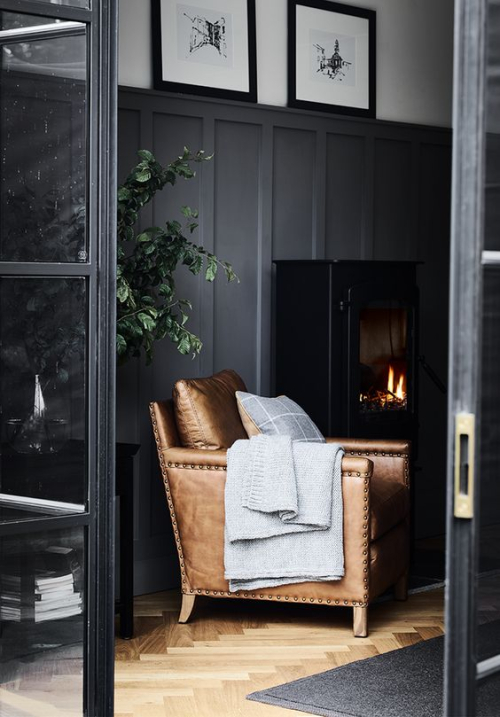 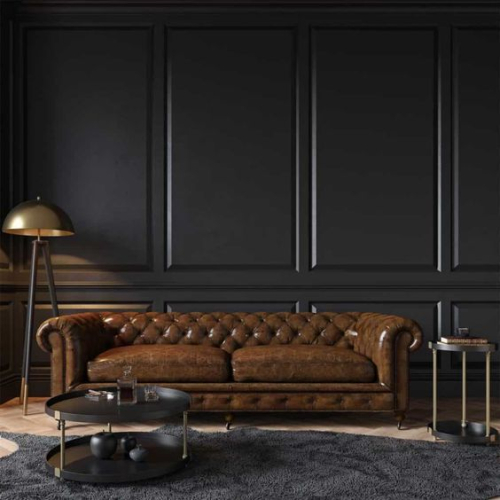 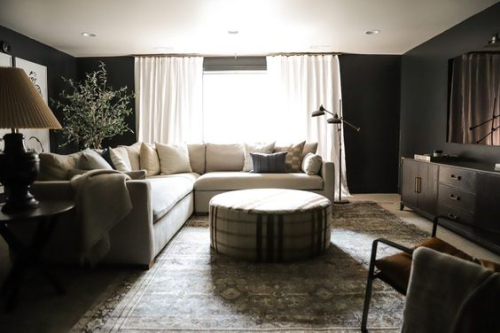 it all started with needing walls as dark as possible to camouflage the speakers. next consideration was a leather sofa. marc has always wanted a leather sofa, and since this is kinda his space, we're going for it. we want to re-use our black media cabinet and console table, but that's pretty much all we're keeping. since we're going to get rid of the sectional, i'll need a place to sit; marc likes sofas that you sink into, but i need more support, so a chair for me is on the list. and while marc thinks this might be a good time to replace the carpet, i don't want to commit to that. the only carpet in the basement that needs to be replaced at some point is on the stairs, and if we're going to change the tv room, we might as well change it all, and frankly, i'd rather sink the money into THE couch and THE chair. and he wants THE tv. so: area rug is our compromise. 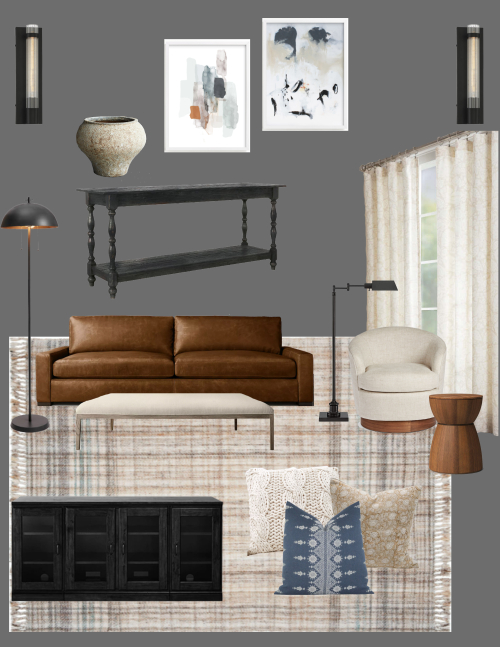 the only things we know for sure on this board are the sofa, the ottoman, the black pieces that we already own, likely the lights, and probably the swivel chair. i love the rug, and he likes it better than the more turkish-type patterns i was initially considering. we may use table lamps that we currently have upstairs in the great room versus adding a floor lamp by the couch. the curtains might be a bit too "patterned" and girly for his taste, and the art may go in the "minimalist movie poster" direction. but the general feel is there. and i'm super excited.

two weeks ago we went to four different stores to sit in leather sofas. we thought we found the perfect one at rejuvenation, then we sat in the maxwell sofa at restoration hardware, and that was it. love at first butt-on-cushion. 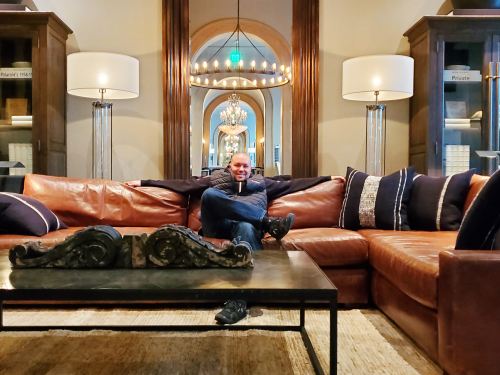 which, let's be honest, reminded me a lot of when marc sat on another restoration hardware sofa eleven years ago, fell in love, and totally changed the vision i'd had for the great room. 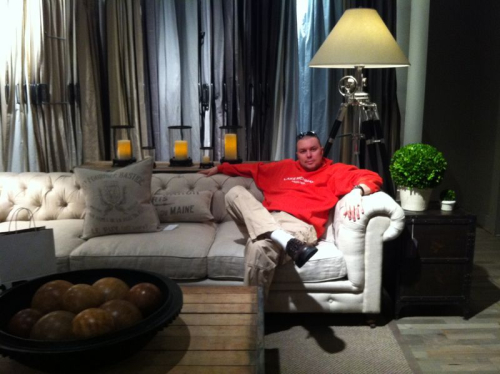 minneapolis has a restoration outlet, so i checked it out on monday, and lo ... they had the exact maxwell we want: right size, right depth, right cushions ... wrong color. but is the color a deal-breaker if we could save a bunch of money on it? marc went with me on tuesday and we examined the sofa all over, looked at every scratch and mark to see if there were any red flags. in the end, there was some wear on a corner that concerned us, and some stitches on the edge of an arm appeared to be coming loose, and we decided if we're spending that much on a piece of furniture, we wanted it to be the color we wanted, and without possible problems.

we did, however, leave with a lovely upholstered cocktail table to put in front of a sofa we don't yet have in a room that's not yet in progress.

and that's where we are. now we wait for contractors to call us back, because until a hammer swings, it's all just hypothetical.

as my crush, rachel maddow, says: "watch this space."