of course she did

i mean, i've known this kid for 12 years. changing her mind is kind of her thing.

this was the plan that she was all, "yes! that's it!" about: we went to the furniture store to order the bed, flipped to the ones i had thought she might like, and she was suddenly as cold-footed as playboy on his wedding day.

"i think i want an upholstered bed instead."

so we left. and i told her that was it; no more planning, no more room. i was out until she was fully on board with something.

about a week later, while walking through target, she spotted a pillow that was a blushy-peach geometric design with gray tassels ... 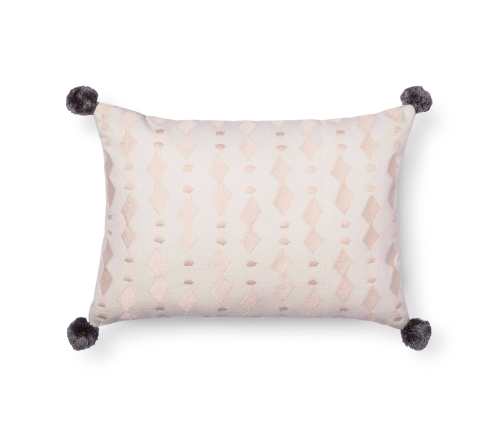 and she had her a-ha moment.

"i really like this peach color. and the gray. that's really pretty."

we walked a little more and saw a gray quilt, and she oohed and aahhed over it, and said, "peach and gray. i like that."

i found some blush-peach sheets, put them next to the gray quilt and the pillow, and she was all, "yup: that."

(seriously: i'm trying so hard to not simmer at this point. do you know how many "yes!"es i've heard from her in the past year about this room?!)

i put the quilt and sheets and pillow in the cart and told her that they would stay there while we walked around the store. if she hadn't changed her mind by the time we were ready to go, i would buy them and we would fully commit to her room. she agreed, then said, "and if i change my mind again, you can slap me in the face!"

that seemed a little dramatic, but ... this IS harper we're talking about.

we wandered another half an hour or so, getting what we needed, and by the time we were done, she said that she really liked the peach and gray.

so: great. but that still doesn't solve the bed issue.

yesterday, i told her to go sit on henry's metal bed, and then go to the basement to sit on the upholstered bed. and take the new pillow with her. she did, and looked at the new pillow with each bed, and stated that she was 100% sure about a metal bed. 100%. and to make sure she couldn't change her mind again, we went to the furniture store, looked at the metal beds in their book, she picked one out as her favorite, and we ordered the damn thing. 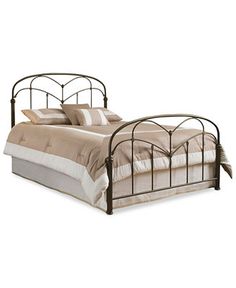 while she did her homework, i played around with the design board i'd made for her. while talking about the new pillow, i said the peach and gray would still look nice with the gray-blue color she said she wanted on the walls, and she told me that she really liked the peach, and might like that for her walls instead. so that was the first thing i changed. then i removed the woodland bedding and replaced it with the gray quilt and peach sheets. after that, a few other options no longer felt right. i swapped out the idea of a print tray for her little knickknacks and clay creations for a gray hexagon shelf that she already has. then i looked for some sort of fabric or curtain for her windows that would tie it all together, and found what i think will be the perfect one at tonic living. the colors in the fabric inspired a change to the paint color for the desk - from the deep coral/peach in the previous plan to a more golden tone. then i found a nightstand at world market that has a similar lotus flower shape as the flowers in the fabric, and i had an a-ha moment of my own.

and then the design board looked complete. 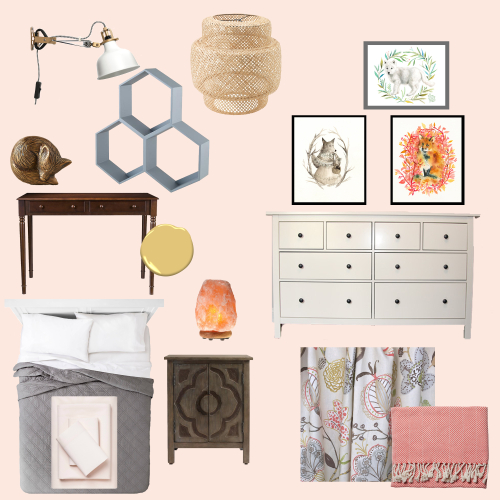 we will also keep the copper and wood shelf idea from the previous plan ... 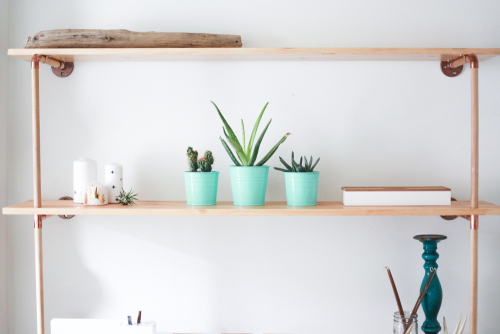 after looking at it all together, i told harper that the bed she picked was going to look great in the room because if you use the creative side of your brain, it kind of resembles a fox/wolf face. the serendipity of it makes me feel like this room is going to stick.

i'm still going to hurry up and paint before she can change her mind again, again.