so yesterday marc suggested making soup, and i got on the pinterest to find a recipe. i found this one and it sounded like a winner. a quick trip to the grocery later, and i was ready to go.

we cooked all the veggies, pureed them into golden soupiness, and ... it was okay. a little on the blah side, though. henry didn't even eat one bowl, and he's mr soup.

as we were cleaning up the kitchen and talking about the soup, i said, "so tomorrow, let's tweak it a bit." we had onions, a poblano pepper, leftover grilled chicken ... we figured we could make that pureed yellow stuff chunky and delicious. 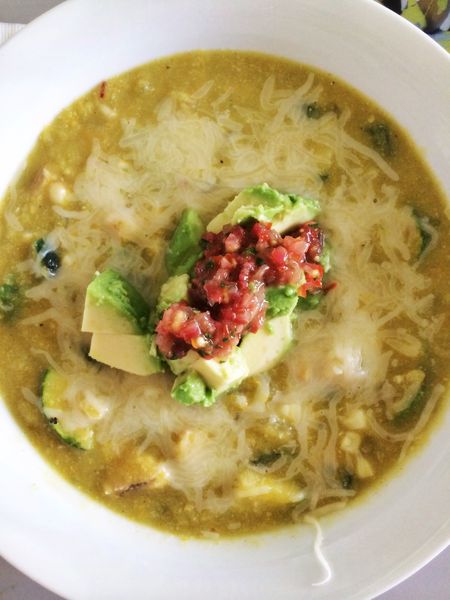 new recipe, if you feel so inclined to use up a plethora of summer squash, too:

(we doubled the initial recipe. however, after eating round one yesterday, there was probably only the original yield remaining. so those are the measurements i'll give you)

slice the summer squash. shuck the corn and cut the kernels from cobs. once you've removed the kernels, break the cobs in half and set aside. chop the shallots, garlic, and jalapeno. (remove the seeds from the jalapeno if you want less heat.)

in a 5-quart heavy pot, combine all ingredients (including cobs) and cook over medium heat, stirring occasionally, for 3-5 mins. stir in 2.5 cups water and simmer mixture until squash is very tender, about 15 minutes. discard cobs. in a blender, puree mixture in batches until smooth (fill the blender only halfway, removed the center plug from the cap, and cover the hole loosely with a kitchen towl. start on low, then move up to puree.), transferring each batch to another bowl. season soup with salt and pepper.

you can stop here, or you can add the tweaks:


dice the onion and poblano. (again, remove the seeds for less heat.) shuck the corn and cut off the kernals. chop the zucchini and chicken.
sautee the onion, poblano, and corn in a skillet under tender. add the zucchini and sautee three minutes longer. add the chicken, then add the pureed soup. add the cumin and paprika. let simmer for 20 mins.
spoon into a bowl, top with some shredded monterey jack cheese, some avocado chunks, and a spoonful of salsa (we used homemade ... because our garden is also giving us an overabundance of tomatoes.)
this soup? this is goooood.