you know that moment, regardless of what activity it is you are doing, when it just clicks? when you finally go, "hey! this is what i'm supposed to do! this is the effort i'm supposed to give! this is how it's supposed to be!" and suddenly you just get it? and you're on?

that happened to henry at last night's swim meet. 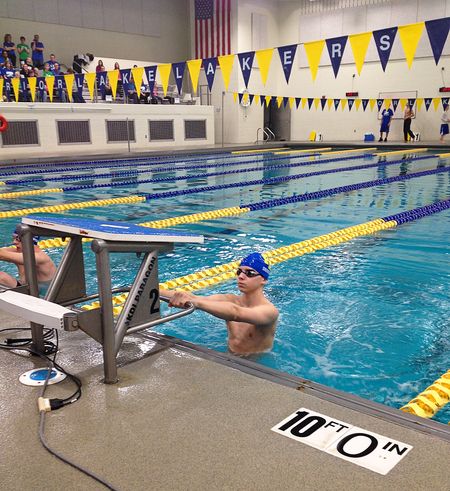 he's been putting in some good work-outs and good efforts lately. his times were slowly dropping during club season, and since high school season started just before christmas, he's held pretty steady, but has had some moderate drops in his favorite events: the 50 free and the 100 free. he's been fast enough to warrant practicing with the varsity team and getting placed in some varsity events at meets. so that's all been good.

on monday, we found out that this coming saturday, henry will be swimming four events - two relays, two individual events - at the high school true team sectional. this meet is for only the top four swimmers in each event from each school. when henry told me that he would be swimming in this meet, i explained to him what an honor that is, and what faith his coach must have in him. that he, as a 13-year-old, is one of the top four times in the 100 free and 100 back, and is needed on two relays. henry just grinned and said, "really? wow. i didn't know that. i just knew i am the only middle schooler on the team swimming at the meet."

he got it. and it boosted his faith in himself.

and last night, that faith literally propelled him.

his first event was the 200 medley relay. he was lead-off man ... the backstroke leg. and he ended up cutting nearly a second off his best time.

his second event was the 50 free. he's been swimming it right around the low- to mid-:26 seconds mark. last night, though: 25.34. half a second faster. the sad twist to this event, though, is that henry was in the wrong lane and ended up being DQed. it was event #8, he had "eight" in the head, and went to lane 8 for his heat. no one was supposed to be in the lane for that heat, the lane timer didn't say anything, and the timer in lane two - where henry was *supposed* to be - never spoke up that he didn't have his swimmer. so all that effort for nothing. didn't matter ... he was embarrassed, but grinning from ear to ear that he broke :26.

then he swam the 100 backstroke ... and cruised in at 1:08. he's been unable to break the 1:11 mark for several weeks, and his backstroke seemed to have stalled in the improvement department. didn't matter. whatever was going on in his head last night made all the difference, and he dropped the seconds.

he was the third in line to race for his team. and he not only kept his team in the running, he actually caught up to and passed another team.

he did it. the little twerp leapfrogged completely over :57 and landed in the low :56.

and i could just see him trying so hard to not burst out laughing ... or crying. he was so stinkin' proud of himself.

and the best part?

after each meet, each of the three captains selects a swimmer whom they consider the "studmuffin of the meet" - someone who really excelled beyond themselves, or dropped a lot of time - and that swimmer is given a muffin. in two years on the high school team, henry hasn't yet ever been given a studmuffin award, and he wanted one desperately. last night, he came out of the locker room, carrying a muffin and smiling a giant smile.

it was his night - the night the whole swimming/competing thing clicked for him. and who knows where he'll go from here. but by golly, he's positioning himself for a pretty impressive run over the next four years. and i can't wait to see it.

Way to go Henry! Such a proud mama moment!