so you know how a) the muppets and b) steve martin are two of my favorite things in the history of ever?

i saw this the other day, and it made me smile big-like:

and it reminded me of the first time i saw - and decided i loved - steve martin:

in the intervening 30-odd years, i've fan girled him every step of the way, through his work in movies and writing and playing the banjo.

(that's not creepy at all, right?)

when he started to tour with the steep canyon rangers a number of years ago, i wanted desperately to go to the concert because i thought, "here's my chance to see him live!" but the date they were in minneapolis didn't work out for me, and i was seriously bummed. when i heard he was coming again this past summer, i immediately called my concert buddy, sue, and said, "yes?" she said, "yes," and it was on.

and i was so happy.

i think the reason i loved steve at three is because of the banjo. it was a sound that was always in my house. my biological dad played (plays), and it was totally normal to see him plugged into the stereo, headphones on, playing along with some bluegrass album. to hear the banjo on the muppets, well, it was like comfort food. it was familiar. and so i snagged on to steve martin.

after my parents divorced and visits with my dad became less and less, hearing the banjo was still a constant during the time i was there. and it was a comfort to know that even though there were 360+ days a year i didn't get to know my dad, that part was always the same.

regardless of my limited exposure, i fell in love with the sound. i'm oddly compelled toward bluegrass, even though my preference is for indie and alternative and folk. but when bands like mumford & sons and trampled by turtles and the avett brothers and the lumineers and the civil wars, et al, became well-known - and even popular - using the banjo, suddenly my affinity for it seemed, well, acceptable.

and maybe even cool. did you see this go around? of course you did.

(on that note: dear santa, could you please put jason bateman under the tree for me? i know i've asked before ... since the 80s ... so don't you think it's time? thanks so much.)

anyway, i couldn't wait for the concert. to see steve - LIVE - in person!! and, on top of that, now he's touring with not only the steep canyon rangers but also edie brickell?! who is amazing?? and is married to paul simon??? stop it. i was over the moon.

and then the night of the concert arrived. sue and i had a fancy little dinner at restaurant alma, then headed to the theater. and i was just zingy with excitement. then the lights went down. and it started. and there was steve. 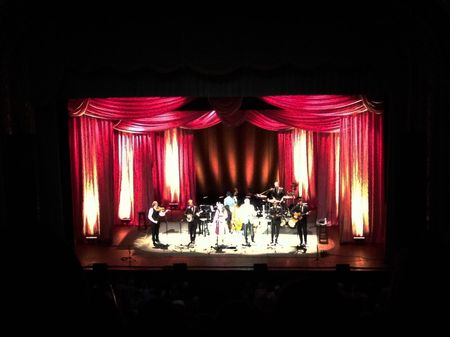 and the show flew because it was so amazing. and wonderful. (and yes ... our seats were crap.)

strangely enough, while steve - and edie - were fantastic and everything i thought they would be, i found myself absolutely in awe of the steep canyon rangers. their talent is transcendent. and their fiddler? astonishing. absolutely. he's so kinetic when he plays that he nearly levitates. it was ... astonishing. that was my only word for it. i even told him so, after the concert, when i found him inexplicably working the goody booth. 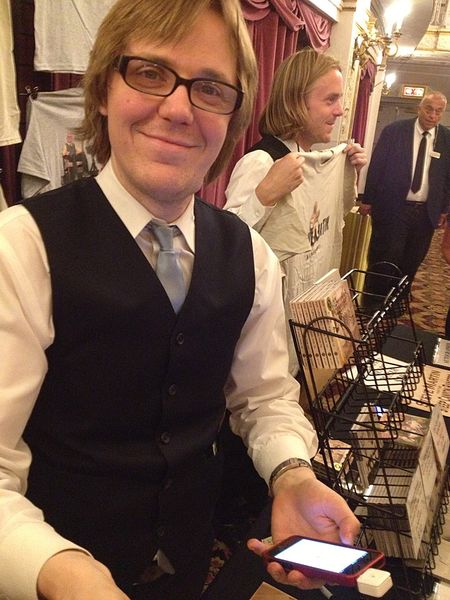 (obviously, their seats were crap, too, but you can almost make out the fiddler's crazy legs on the left side of the stage.)

and on the way home, i got to thinking about how i wish i could play something. i didn't grow up around my dad, so i never got to do the whole "my dad taught me to play" thing that other kids have. i'm sorry about that. doubt it will happen now. but i would love to learn to play the guitar. when i think about what music i would put on and zone out with, i come up with paul simon ... and brandi carlile ... and the lumineers ... and joshua radin ... and cat stevens ... and so on. the guitar is calling me.

after seeing the concert, i started to talk to my friend tina, who sings, about this need i have to play something. she is currently part of a band of 40somethings who get together to jam and just enjoy themselves, and she agreed that she's always felt the same way about learning an instrument. now we're floating the idea of taking guitar lessons together, and i am swearing right now to make it my mission - my birthday present to myself - to start after the holidays. every time i put on a cd by someone who inspires me, i wish i could do as my dad does: grab my guitar, sit on the couch, and play along.

i felt it, on some level, at three. and i still feel it today. there's a part of me that feels completely untapped, and i'm gonna tap it. and seeing steve may have pushed me over the edge.

so thanks, ramblin' man.