phase one of getting stuff done

last time i blogged, i mentioned we were poised to get busy around here. i was thinking, "hang some pictures" or "finally raise the curtain rod in the basement" or "get marc chop chopping on mounting the tv in the front room." however, <insert new plan here>.

the area behind us is finally being developed. as in, every lot is sold and about eight houses have popped up since early spring. right now, the lot directly behind us is empty and we have a clear view down the new street. the house going up on that corner was landscaped a couple of weeks ago, and one of the first things they did was pop in half a dozen really large, beautiful pine trees and maples. a 20'+ maple is in direct line of sight from our house, and i said to marc, "if we were going to put in trees, i would want them to be trees like that. trees that look like TREES, not saplings." he agreed, and told me to go find out how much that tree was. so i put on my shoes. ran down the hill, stopped the tree guy, and asked for the price of the trees he'd just installed. what he told me was actually much less than i anticipated, so i asked him for his card and said we'd have to have him come out to take a look at our yard. he told me that he would be free in five minutes and would run over.

we figured that now that there are houses behind us and we've lost 85% of our lake view (*bitter*), we'd rather look at lovely trees than the backs of beige houses. and since the lot behind us is still empty, now is the time to do it. so we did it. 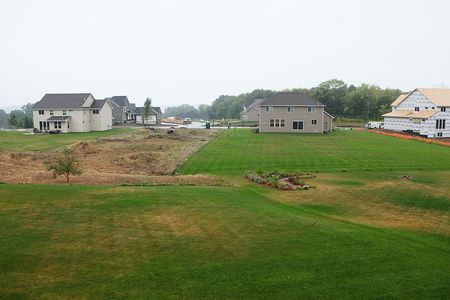 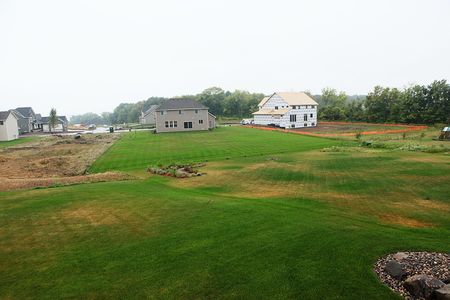 sparky (yes, the tree guy was named sparky) arrived with his giant digger and eyeballed exactly where the first hole needed to be. an hour later, he returned with our first pine and placed it perfectly. 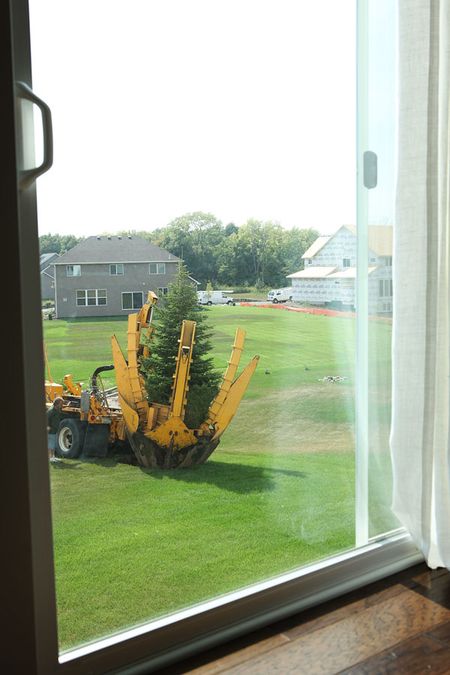 then he dug the next hole, and while he was doing that, another smaller truck arrived to make a hole for a dwarf blue spruce. the buys left and returned with a big pine and a little spruce, then dug the final holes and left again. 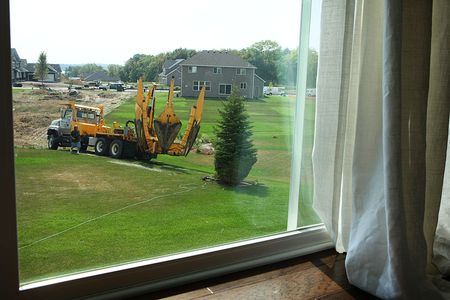 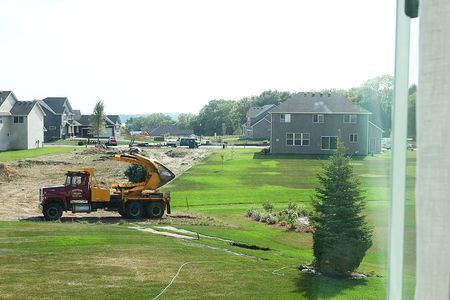 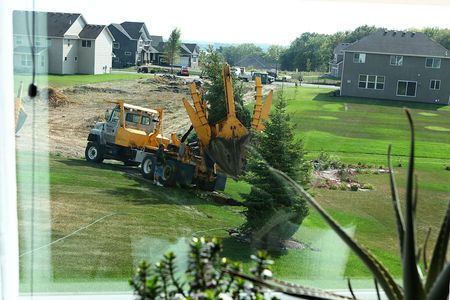 soon, all five trees were planted, and we commenced with running the hose for five hours a day. should be an awesome water bill next month. but the trees are beautiful and finish the back side and corner in such a lovely way that we said, "hmm ... we should really figure out where the raised bed garden will be since the sod will be here next week."

before we talked to the tree guy, we'd already met with a landscaping company to make a plan for getting some perennials in the ground and making it look like we live here. and the landscaping was going to take place the next day, and a crew was coming to grade the back of our lot where the wildflowers used to be and lay sod the following day.

on tuesday, bright and early, the truck o' plants pulled up. 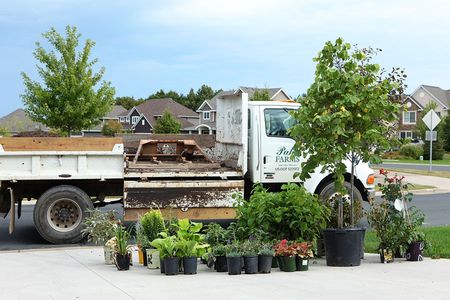 and seeing all of the pots made me giddy to get to spring and see everything coming up ... six annabelle hydrangreas, three peonies, four rhododendrons, dianthus ... coral bells ... hosta ... black-eyed susans ... and so many more. plus a crab apple and a rising sun redbud, which, if you've never seen one, is the coolest. i told the landscaper "no maroons, no evergreeny things, nothing that doesn't look like it should be by a farmhouse. and stuff that will attract butterflies, hummingbirds, and bees."

and she made it happen. 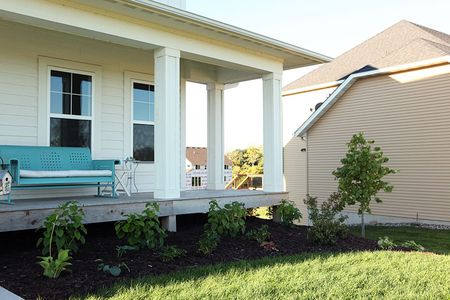 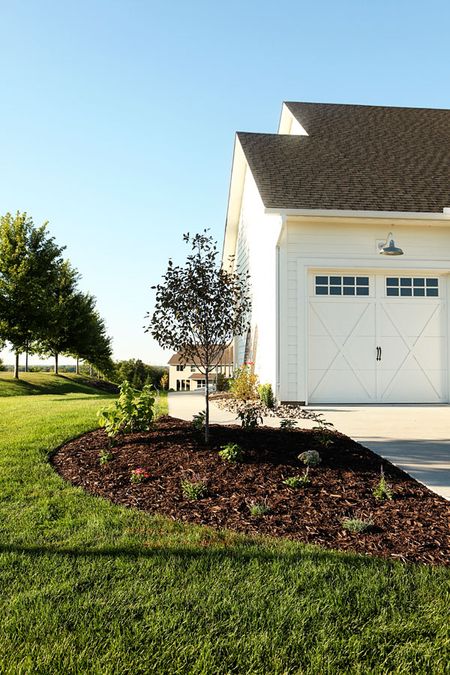 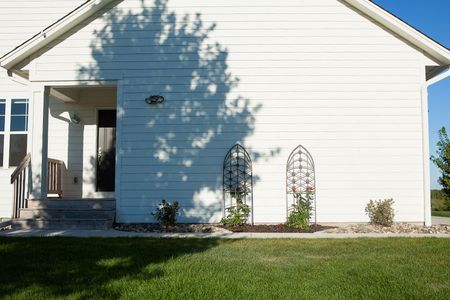 (trellises with atomic red trumpet vine ... guaranteed to bring hummingbirds and butterflies and bees to the yard. and around it will be an annual bed.)

it will take a couple of seasons for everything to establish and grow, but it's started. and i can't wait for spring now.

all of that went together without a hitch. the same cannot be said for the sodding.

they got it all graded and laid down some dirt, but then we were told that there is no sod to be found. the wet spring and overly busy building season had left sod farms empty. marc and i found that a bit odd, considering we were told on monday that sod would be laid on wednesday, but on tuesday there was suddenly none. so the landscape company started to call around to find someone who could seed. in the meantime, i started calling local landscapers to see if any of them had sod, and one replied with a yes. he came out to give us a quote, and we ended up getting sod delivered and laid, as well as irrigation added in that section, for less than the first landscaper quoted us for just the sod.

so after about a week of calling and scheduling and planning, etc., the yard is done: trees, plants, grass, water. and today, marc is building the garden boxes. 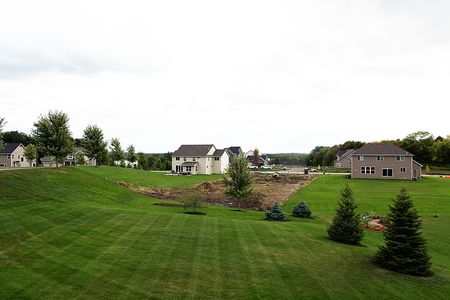 and yesterday, the surveyors staked the lot behind us. 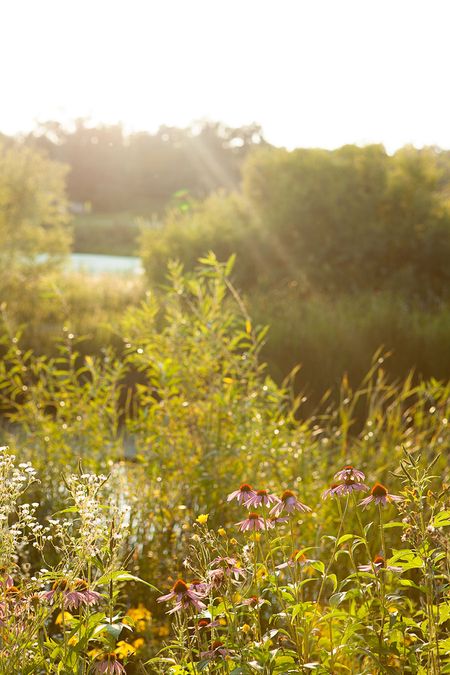 instead, let's talk about the plans i have for fall.

this month marks two years since we moved into the new house. (??!! but seriously, two years.) things have come along quite swimmingly over the past year or so, in terms of finally procuring furniture and happy details and settling in. i even unpacked two boxes in the crafty room last week ... and i think there are only two boxes to go. and those are the last two unpacked boxes we own!

i plan to do an updated tour, because i totally left you (those of you who are into the housey/decoratey stuff) hanging awhile back. i teased things like bookshelves and curtains and cabinets of awesomeness, then wandered off like a senile old person.

but i'm kind of glad, because the house has come together even more since then. we still don't have a rug or a coffee table in the great room, but i'm closer to knowing what i want in there. we still haven't hung any pictures, but only because i'm super indecisive about that; and that will change this month. oh yes. we still haven't done much with our bedroom other than buy some nightstands ... finally, but now there's talk of getting a Big Kid bed (ie a king. because marc traveled for 12 weeks straight over the spring/summer, sleeping each night on a king in hotel rooms, and now he can't keep his elbows and knees and feet out of my eyeballs and ribs and legs while we're sleeping.), so i guess it's good we haven't invested in anything else until we know what's going on with that.

however, harper demanded requested we return her bed to her ... she just couldn't get into the beautiful black jenny linds in her room, knowing that her beloved ikea trundle was just down the hall in the guest room. so a couple of weeks ago we started rearranging, and now her room is almost ready to show off as the First Redone Room in the House, closely followed by the guest room, which is the Second Redone Yet Slightly More Finished Than The First Redone Room in the House, and is even dressed in fall colors, because i was already getting in the mood for fall in august. 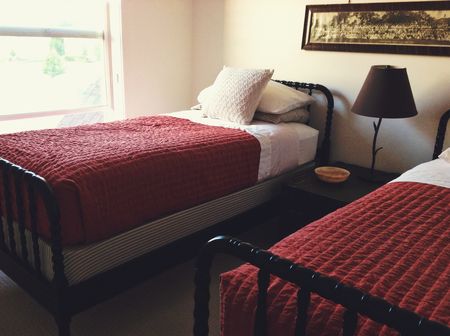 (just to tease you. or not ... there's not much else new to see in this room except the beds.)

but today i got a crazy hair to Get Stuff Done. maybe it's because the kids are back in school and i have my days back. maybe it's because i'm super tired of marc asking me when i'm going to "hang something on the walls already." maybe it's because we went from "we should really get some flowers planted" to full-on "landscapers will be here next week to install a buttload of plants around the front of the house, and while we're at it we should really plant, oh, five trees in the back and hey! let's talk to the deck guy and get that ball rolling for next spring" in a matter of three weeks. the idea that things are happening and we're going to start looking like we actually live here from the outside has spurred me into action to finish projects on the inside.

my project today was to get dimensions and prices on frames from various places and get a game plan together for that gallery wall in the great room. and, hand to god, that will be done by the end of next weekend. which started the idea of A Month of Plans: cooking, organizing, projects, et cetera. and i'll share here, so i'm more accountable. i've even subtly mentioned the idea to someone to see if i could get a playmate. (you're sharing baked goods, right, ms jen? cuz i won't do that.) and between now and mid-october i will get #&%* done, man.

won't that be nice? 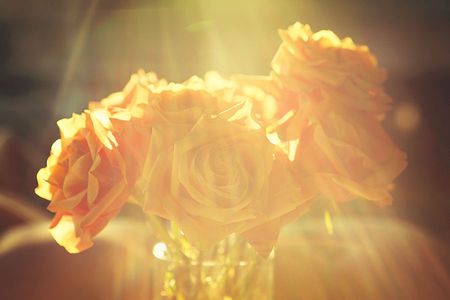