where have i been
... and then it was december.

that was pretty awesome

on friday, henry came home from swim practice holding a piece of paper and trying his hardest to not smile his fool head off. he handed me the paper, and lost the fight against the grin.

"i got bumped up to juniors," he said.

only three months in the top intermediate tier, and his coaches moved him on.

he was super proud. as was i.

he was still riding that high on sunday, when he attended a break-out clinic, hosted by his club and led by three olympic swimmers: megan jendrick ('00, '08), matt mclean ('12), and jimmy feigen ('12). 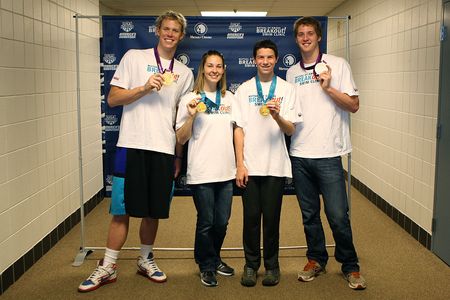 (sidenote: my kid always looks like a giant. put him next to two olympic swimmers who are 6'5" and 6'6" and suddenly henry looks like a kid. however, he's supposed to end up around 6'5" ... which makes my mom heart go apoplectic at the thought of feeding and clothing him for the next handful of years.)

the four-hour clinic started with about an hour of introduction and advice and "what i've learned" from the athletes, during which mclean's gold medal from london made its way around the kids. 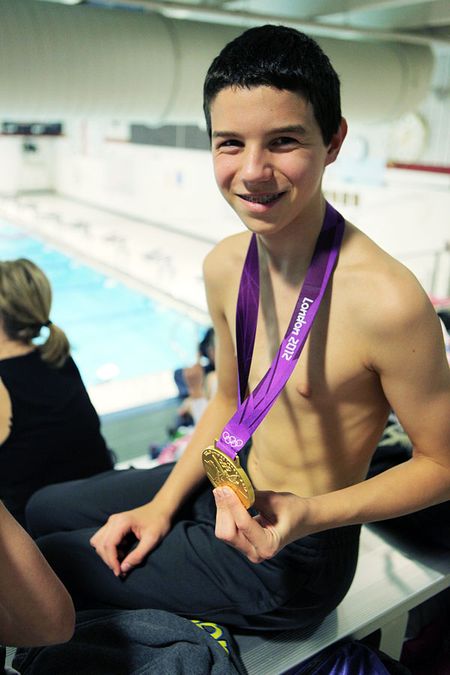 i think it looks right at home on henry, yes?

and i totally held that puppy. 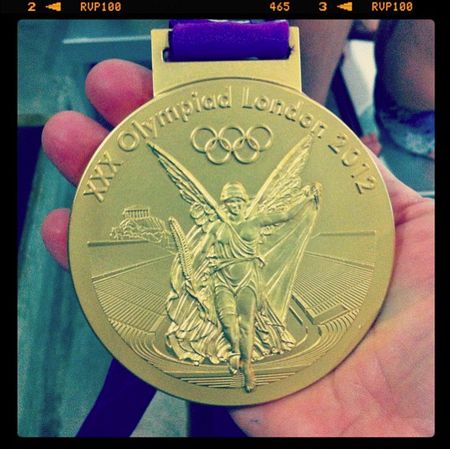 it was surprisingly large. and heavy.

the kids were completely into the the moment, and hung on the swimmers' every word. 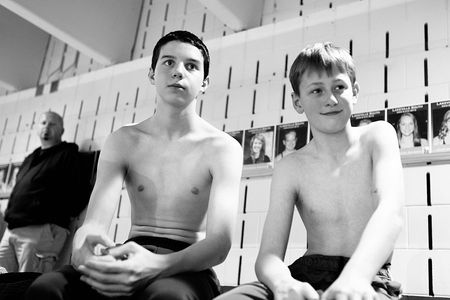 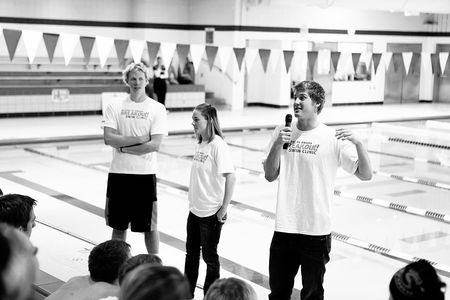 but then it was time for the fun part: swimming with the olympians.

how many kids get to say they've done that?

for the next two hours, megan, matt, and jimmy broke down the strokes with some training drills, and the kids swam alongside them. 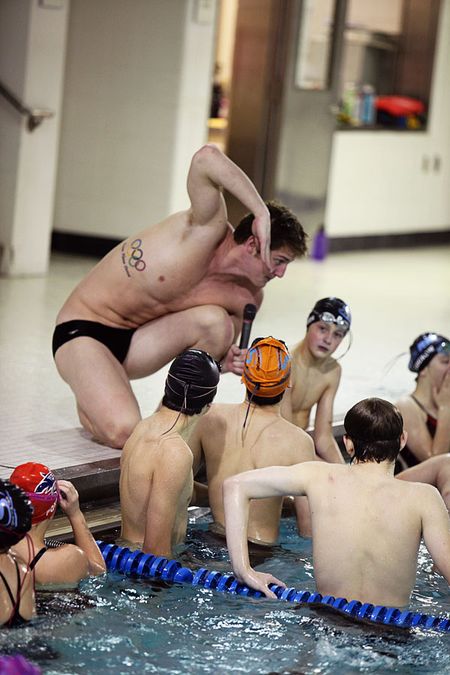 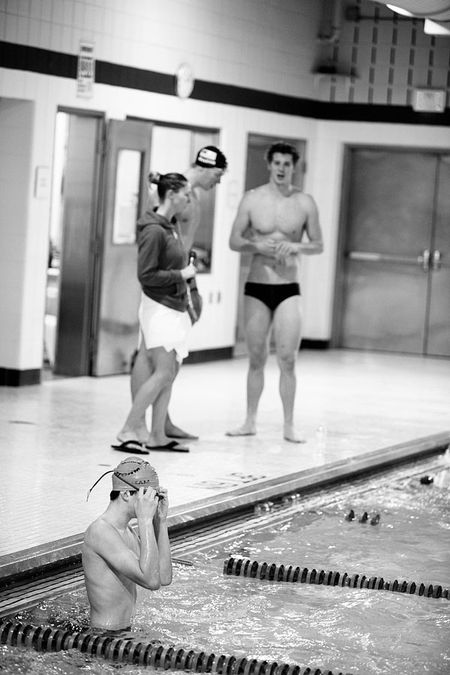 and then it was time for the races.

each kid got a chance to race the swimmers. henry (lane one) chose to swim in a backstroke heat - 25 yards against jimmy feigen (lane four). 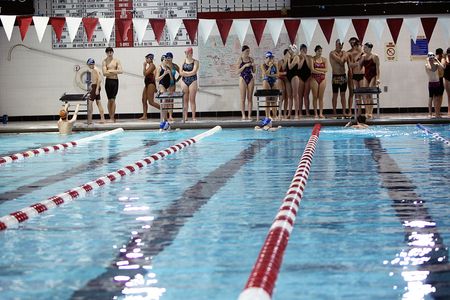 jimmy gave the kids a five-second head start, and he didn't go his hardest ... but my kid totally won the heat.

and got a high-five from jimmy. 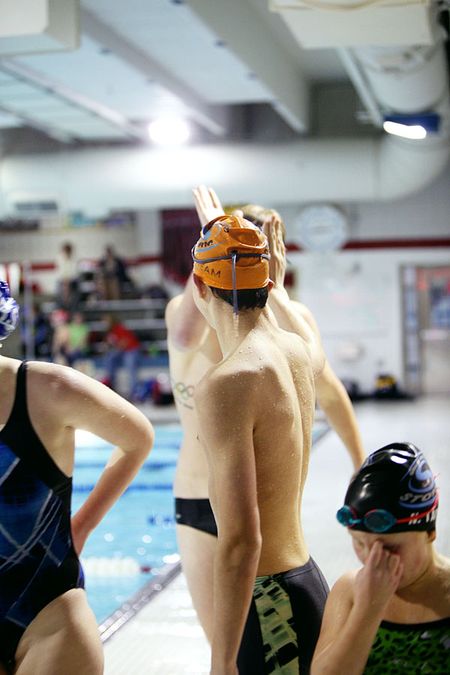 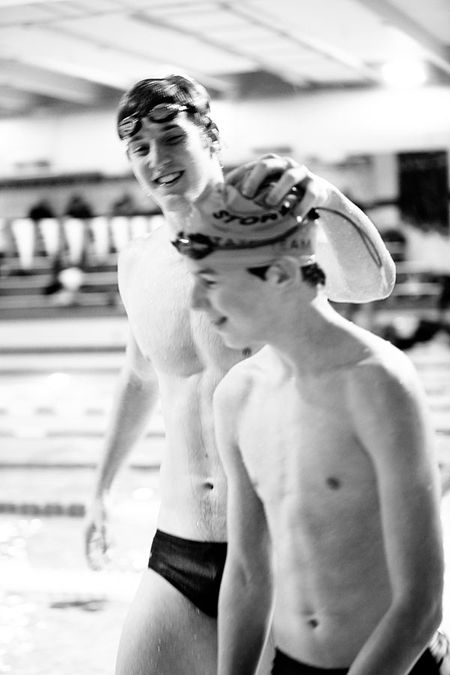 and i think henry was floating after that.

the final heat was a 25-yard freestyle race, which henry was also invited to swim in.

now, i've been to the olympic trials before. i've seen these athletes swim In Real Life. however, unless you see them in a regular-size pool with regular kids, you just can't grasp the power these athletes have in them. it was awesome to watch. 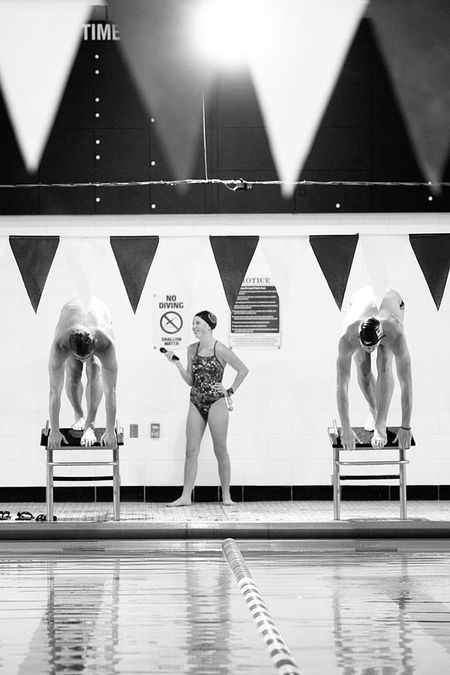 the last race was a good one ... and henry swam his heart out. 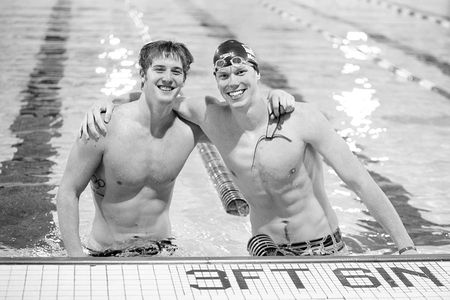 after the last race, the kids went back into the stands for another half hour of Q&A. megan, matt, and jimmy were charming and patient and great with the kids and full of tips and honesty, and the kids ate it up.

on the way home, henry was fairly quiet. then, about 10 minutes into the ride, he very quietly said, "that was pretty awesome." then he went back to playing on his phone.

I was on the edge of my seat just reading this. How super amazing.

Wow..what a fantastic experience - Olympic athletes are just awe-inspiring; it must have been thrilling just being around them. Your son is very lucky that he has found his passion, and experiences like this can only encourage him. Well-done to your son!