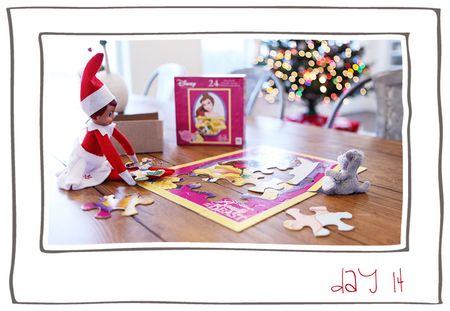 today we discovered that at some point in the night, snowflake decided to add some sparkle to the garland in the loft window. and it didn't go well. and when gray kitty tried to help, it didn't go well for her, either. 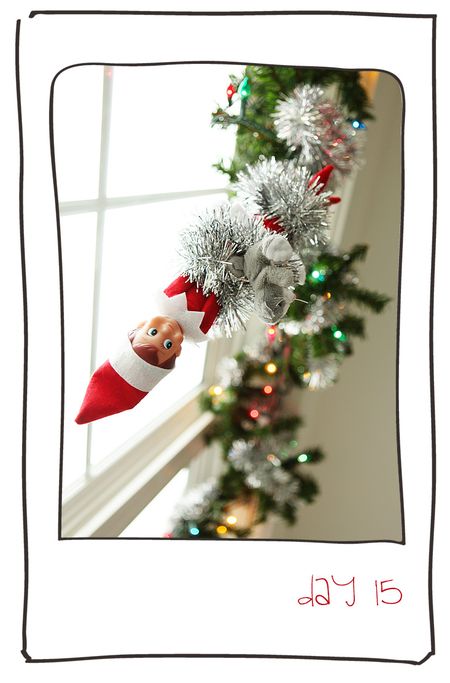 what's that, you say? on day 14 they appear to be sitting on a real piece of furniture? well, yes, indeed. our dining room table finally arrived, after a two month saga. that is still going. 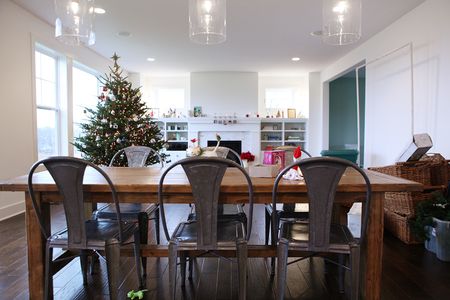 during the process of designing our house, we found the bennett dining table at pottery barn and decided it was exactly almost what we wanted. we (i) wanted something rustic, long & narrow, reclaimed. this was the not-reclaimed version of that vision. but the dimensions were perfect for the space allotted for dining, and fully extended this table will seat 10-12 people, which is what we need. so we decided either we'd find someone who could make a real reclaimed wood table, and i sent out several email queries, or we would, worst case scenario, get the pottery barn one.

around the time we closed on the house, it had become clear that having a table made wasn't in the cards. the people who actually bothered to return my emails were either a) not getting it, or b) out of our budget. so back to pottery barn we went. and the table was marked down. marc and i talked it over and decided to pull the trigger.

three days after discovering the marked down price, we called to order it. as the story of my life goes, the table was, at that point, discontinued and nowhere to be found.

the person i spoke with looked in the computer and told me that there were four tables left. "in the warehouse?" i asked. "in the country," she replied. all four were currently floor models ... three in california, one in arizona.

upside? all were marked down even further.

so i called all four of those stores. one didn't get back to me, one no longer had the table, one was helpful, but said the table wasn't in great condition, and the third - the arizona store - said yes, they have the table and it was only ever used in the window display and it's in good shape and they could get it to us.

if we work it out with ups.

so we called ups with the dimensions and weight, and found a table that size would cost us $1,700 to ship freight.

i threw up a little.

that was more than twice the cost of the table after markdowns!

so trey, the uber-helpful guy at pottery barn in arizona, and i discussed our options and ways around freight charges. then marc was telling me that a friend of ours runs a shipping company, and he could get one of his trucks to get it to us for about $300.

so two mondays ago, the truck went to pick up the table ... and found it wrapped in an unsatisfactory way. (one month of the delay was all about trying to find a box for the darn thing, and ending up with the pottery barn stock guys creating their own box out of other boxes. apparently, 10' long boxes aren't readily available.) three days later, the truck showed up again, said the boxing was now good, and started the trip to minnesota.

monday evening, we got word that the table was in. we had, literally, 90 minutes to get henry to swimming, drive 20 minutes to the warehouse, load the table into my suv, drive 20 minutes home, unload the table, drive back to pick up henry from swimming. and it all worked out perfectly, except that because both seats had to be down, harper had to ride freestyle all the way home. which made me ill, and made her giggle.

but we finally, after two months, had it in our house. marc went to build it and found that one leg had worked itself loose, but it wasn't anything a little wood glue wouldn't fix. then he found he was short two bolts, two nuts, and a 2" piece of dowel. nothing a trip to the hardware store first thing tuesday morning wouldn't fix. just before lunch, and just before leaving on a plane for a business trip, marc had the table ready to go. and it looks perfect in the room.

then i said the fateful words, "lets pull out the leaves to see how it looks fully extended."

are you kidding me?

that was two days ago. still haven't heard back from trey as to where our leaves are. however, if they are gone, we're up a creek without a table. and we're back to square one. and now we have to somehow get rid of this table that took us two months to get in the first place. because even though it's totally functional without the leaves, we need to seat more than six people. that was the whole friggin' point all along.

all of this is coming on top of so much other stress and uncertainty, and i'm at the edge. this morning i got up, got the kids off to school, went back to bed to sleep another hour and get rid of a crazy headache, and woke up at 11. i think my body is telling me it's done.

so tonight i will again call trey in arizona and see what he knows. and i will wait for marc to get home from his trip ... his flight has been delayed for the past two hours, so who knows if he'll even get here tonight. and i will go up and referee the fight that seems to have broken out upstairs in the past two minutes. and i will try to keep the big picture in mind and realize that, in the scheme of things, these are not big problems.