things are getting interesting
doing a happy dance in crazy town

henry started basketball camp today, so after dropping him off at the high school, harper and i headed to the house to see what they'd been working on. as we got closer, i noticed the sky getting darker. as we headed up the hill in the neighborhood and got our first glimpse of the house (more siding!), we also noticed the sky (turquoise and charcoal are trendy colors, but are they good colors for clouds?) ... 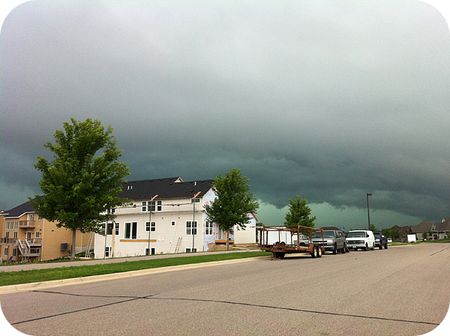 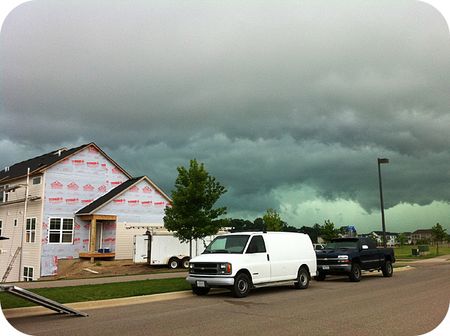 i told harp we'd do a quick run through the house, and then could probably beat the rain home. i turned to take a pic of the front of the house, and just as i touched the screen on my phone, the car shook with a huge gust of wind. 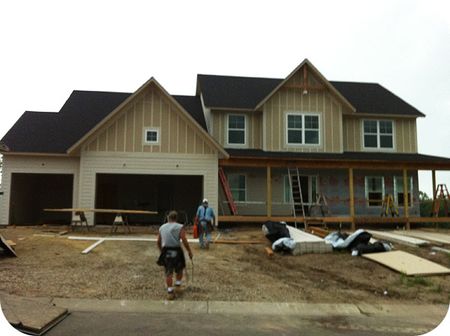 the guys in the house were working hard, unperturbed by the impending storm, and calmly switched on work lights. i'll go back later to take pictures to show you, but as i looked around in the gloomy light, i saw the banisters and newel posts and spindles have been installed. and they're gorgeous. harper and i ran upstairs to make sure the windows were closed (yes), then ran to the basement to see what was going on down there (ceiling appears to have been primed, but it was hard to tell in the nearly pitch black space.).

we ran back upstairs (literally, the whole trip last about 12 seconds) and the house seemed to be swirling. the windows that were open on the main floor were letting in all the wind that was picking up outside. harper started to plead to go home, so i grabbed her hand, said bye to the guys, and went to the front door.

just as i opened it, a huge burst of wind blew and nearly ripped the door out of my hands. (glad i was hanging onto it ... would have hated to have to explain to the guys why i needed the drywallers to come back ...) we walked onto the porch and saw the tarp that was around the siding boards flapping in the wind, a piece of insulation from another construction site on the other side of the street go blowing past, and the sand and dirt from the yard pelted our legs.

as harper and i ran to the car, i heard a crashing sound ... a ladder that had been propped against the porch had been blown over. i yelled at chris, our lead construction guy, to be safe, and harper and i headed home.

i got about half a mile away, and while waiting for traffic, i checked out the sky again ... 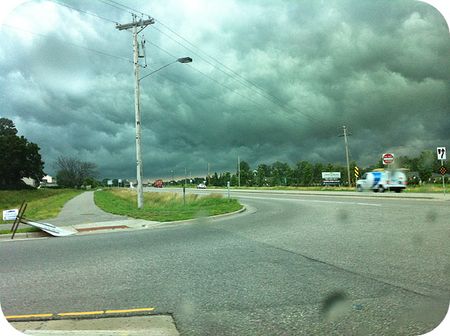 amazing. and ... heading in the direction we needed to go. i crossed my fingers we could make it ahead of the rain. lucky for us, we managed to hit every red light on the way. and the sky didn't improve. 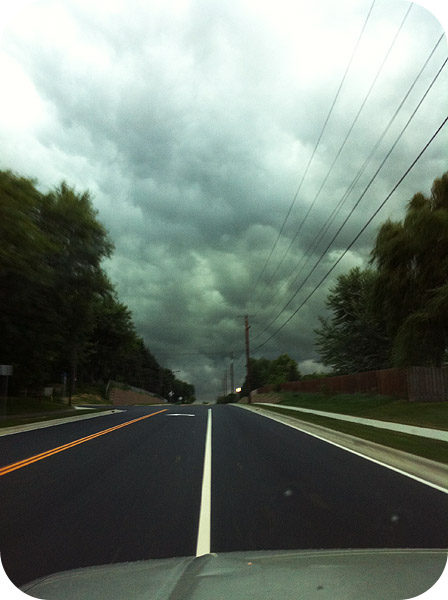 two-thirds of the way home, the sky opened, visibility went to less than zero, and that was that. we were caught in the rain.

we should have ridden out the storm at the house, i guess.

tomorrow i'll take my camera, will hope for better light, and will show you those stairs, cuz ...wowza. they're awesome.

ack. i'm glad you made it home safely!

Those are some scary clouds! Glad youre ok and great pics.

Wow, beautiful photos, but scary in the process I'm sure. Glad you made it safely!

Great pics! Glad you made it home safely!