suffice it to say, this week was crap.
i can't wait.

we've made it to the wednesday of the first week we've truly had off all summer long ... and have done so without transportation.

and we're all still alive and speaking to each other.

monday was serious chill time ... the kids used their next three months' worth of screen time, i did five loads of laundry, no big issues.

they even had so much fun that day that they opted for a sleepover in harper's room.

see how sweetly they slept? 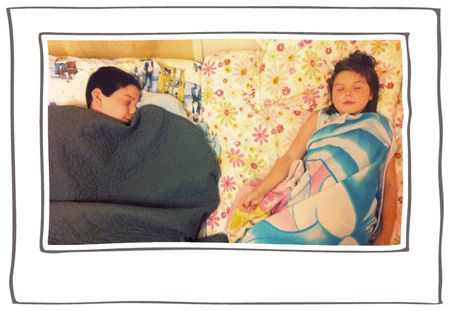 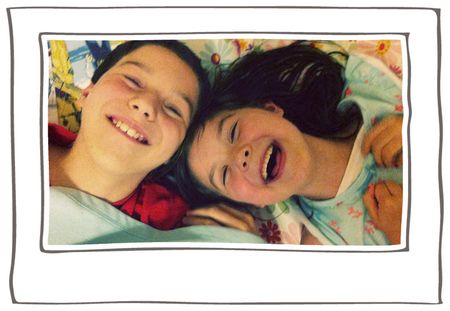 tuesday morning marc dropped us off at the movie theater for a $2 kid movie ... we watched "hercules" and tried to ignore the "i'm gonna pretend i'm bored and this is stupid" 14-year-olds behind us who made more noise with their snacks than should have been permitted by law. or common decency. 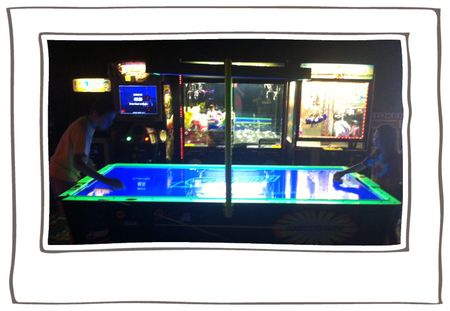 then we walked to the mall to find jeans and eat lunch.

score on the jeans: old navy was having $10 jeans day or something like that, so each kid got a couple of pairs. the only hard part is that henry is still a slim, but he's tall. and they don't carry "slim" in "tall" in the store. the saleslady actually tried to justify that i could just buy him a size smaller but in "husky," thinking "wider" must also equal "longer."

silly lady. you suck at your job.

this boy is about my height ... let's just say the lower end of the five-foot spectrum ... but he's still wearing swim trunks from three years ago.

did you see this photo a few weeks ago? of henry playing in the sprinkler in 2008? 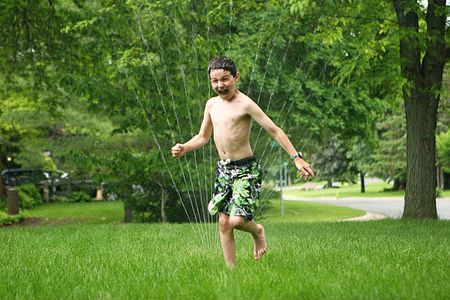 he totally put on those swim trunks earlier this summer.

granted, they were too small and i made him go change, but he got them on.

the kid needs "slim." not "short but husky."

we tried on regular jeans to see how much we'd have to suck them in with the adjustable waist, and there was just too much suckage. it reminded me of that old snl/gap skit: "you just cinch it."

then i had him try on skinny jeans, to see if they were smaller in the waist without being too ... well ... hipster. 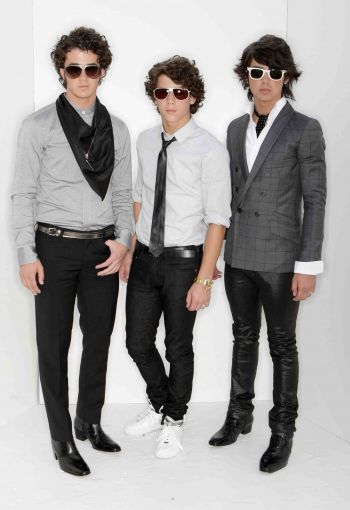 so we're good on the jeans.

marc picked us up at the mall after lunch - he was between meetings - and we did a quick trip out to the house (they were prepping to start painting trim and cabinets ... yay!!), where we saw a gaggle of kids from the neighborhood right across the street from our house, hosting a lemonade & snow cone stand. my kids grabbed some dimes and headed over, and 10 minutes later when we went to pick them up, we discovered that the model home kitty-corner from our house finally sold, and the family has an 11-year-old boy ... yes!! this brings the count to:

5- to 6-year-old girls in the neighborhood: a bazillion. give or take.

marc dropped us off at home, then he headed out for a dinner meeting. the kids and i had leftovers and watched "pee wee's big adventure," then it was bath & bedtime.

so far today, we're just chilling again. my car should be done later this afternoon, so we'll pick it up tonight after marc gets home. then tomorrow: freedom!! we can actually go and do something!!

wonder what that will be ...

So glad to hear about the skinny jeans, don't know that I would have tried them on my boy but will now.

I hope your last day of confinement goes well.

Love the skinny jeans! Grace wears a size 8 skinny from the GAP, and they fit her like regular jeans, but w/o the cinching. Very cool. She loves them. They're more comfortable too, she reports.

Sometimes having a good reason to stay put is a very good thing. Enjoy.

Haha I was going to suggest skinny jeans before I got to that part! We have the same problem I have a tall and skinny and a short and skinny. We still need to cinch but not anywhere as close as ridiculous looking as with the regular ones.

i need to remember the skinny jeans thing too...glad your week has been good despite the being carless thing...

peewee's big adventure!!! have your kiddos watched uhf yet? we found it on netflix instant streaming and mine have watched it 10x in the last 3 weeks.

oh my gosh! you made me laugh out loud!! and what's up with the theaters that have kids that don't know how to be quiet? we experienced the same thing on saturday watching "kung fu panda:2"