it's summer. which means the kids are home. 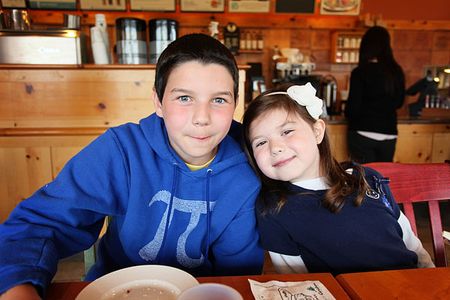 the two weeks since school ended for the summer have been relentless. today is actually the first day that the kids and i are home ... with nothing to do ... since summer break began.

(and, in full disclosure, henry has a dentist appointment today. so, we don't have nothing to do, per se.)

so what's been going on?

well, the first week of summer break, harper attended a ymca day camp. she was hiking and canoeing and singing and swimming and crafting and fort-building from 9 a.m. to 4 p.m. every day.

to say she came home tired and dirty and cranky each afternoon is an understatement.

but she had a blast. she even got to tie-dye, which may have been the highlight of the week for her.

last week she attended vacation bible school with one of her kindergarten friends. another week of driving - the vbs church was 20 minutes in the opposite direction of everything else i had to do last week. luckily, her friend's mom and i took turns, so that helped.

during this time, henry took a private swim lesson with one of his buddies. we had reached an impasse: he was fed up with swim lessons that took place in a small pool with too many kids in the lane, whacking into each other and slowing him down and goofing off, and he wanted to be done with lessons. i felt he wasn't quite where i wanted him to be. (ie i KNOW he could be a great swimmer, he has great natural ability, and i didn't want him out of the water without getting to the point where he could try swimming competitively, should he so choose.) his friend's mom called me about getting henry in with her son, so they could share a private lesson. the whole pool would belong to the two boys, and the teacher would have time to devote to henry's instruction. so i said yes, and he spent half an hour each day in the pool over the last two weeks.

this turned out to be a good thing.

he was finally given the room to SWIM. to move his arms and kick his legs and go. and he was never pushed for endurance before; in this pool, he HAD to swim the full 25 yards. and flip turn. and swim another 25 yards. 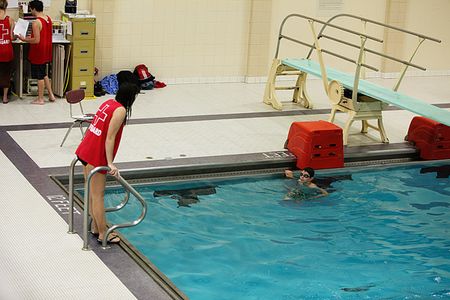 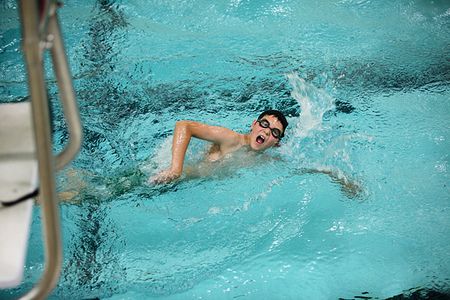 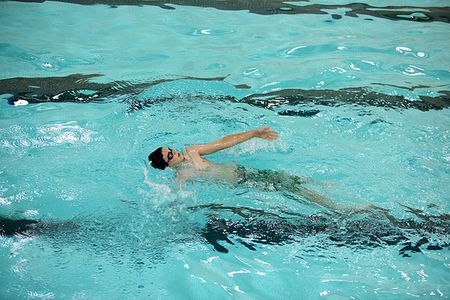 where his last swim school taught the basics of stroke technique, this lesson brought home the fact that he can put it all together and keep. going.

at the end of the two weeks, he had to swim 500 yards to test moving into the next level. the kids were allowed to swim any stroke they wanted, as long as they got to 500 yards. henry stuck with freestyle, backstroke, breaststroke ... no sidestroke, no elementary backstroke, nothing restful. he swam. and while he was swimming, his teacher asked me how old henry is. i answered that he was eleven, and she nodded. at the end of the lesson, while the boys were changing, she told he she'd never had an eleven-year-old student swim 500 yards as quickly as henry just had.

that evening, i told henry that his teacher had said he was ready for swim team, that from here he needed to work on streamlining the mechanics of his strokes, and "lessons" wouldn't do much for him. i told him that i'm okay with him taking no more lessons (score one for him) if he agrees to try one season of swim team (score one for me). and he's also agreed to swim at the y with me and let me work with him on his technique ... the lure of not being in a "lesson" is strong now, and i believe he's finally acquiesced that mom knows what she's talking about on this one and maybe it's okay to listen to me. once he heard that his teacher thought he was a natural and could excel in swimming, things i've tried to tell him for years, he was okay with switching to competitive swimming.

i think all along, henry has been searching for a sport that he can do well. he has tried several different ones - a week here, a season there - but doesn't pursue it any further. if he can't be the best at it within that short time, he doesn't want to put forth any more effort. however, he's since decided he likes basketball (to which he has a natural affinity, thanks to his dad. and hopefully he also has his dad's natural ability.) and wants to pursue it, and now he's okay with adding swimming to that list.

here's to hoping he's finally willing to do the work and put in the time. i think once he starts competing and being a part of a team, it will all be way more enjoyable.

it's been a busy but good two weeks. now we have a breather, and soon more camps will start, and henry will begin summer band: the trombone looms.

god save our ears.

Looks like you guys have a had a busy summer so far! But, it also looks like fun! :)

Such fun reading about Henry's swimming! All my girls are in swim club, and I'm mostly delighted at it being such a positive sport. However, the six days a week practice make me want to run screaming from my life on a daily basis. Nonetheless, it's a great sport.

Also, you're so funny.

Hope the house build is moving along nicely. Care to give me some design advice about extending/redoing our back yard/patio?

Isn't it funny that even summer vacation sometimes needs a vacation! Love those pics of the tie dye fun!

that is awesome!!! yay for some good lessons and finding some love for the sport.