just a quiet little weekend.
i'm not giving you the silent treatment.

time is moving so darn quickly, and as soon as i get an idea in my head that i want to put down here, crazy happens and it's three days later.

has anyone else realized that we're nearly a third of the way through 2011 already?!

there's more crazy heading our way this week (negotiations, paperwork, money, visit, travel, contractors, cleaning, moving, prepping, painting, popcorning, cleaning, tiling ... and that's just the next 10 days), so in lieu of writing something informative or deep or entertaining, i'm going to share a tutorial. because i've been asked a handful of times in the past month, and this is just easier. 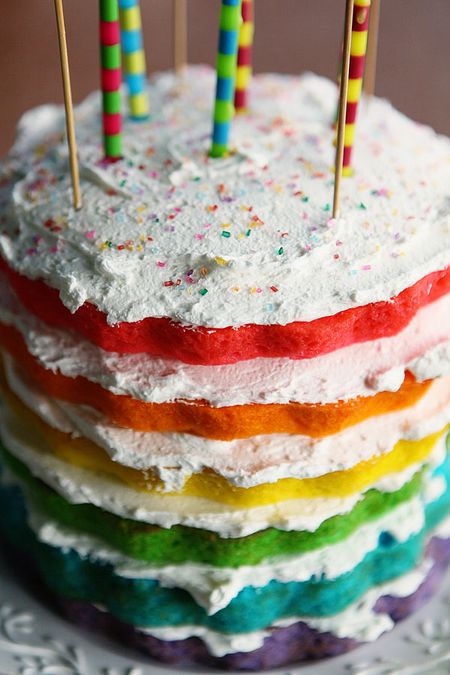 now, i don't have any pretty little step-by-step shots ... i was given about two hours in the house by myself to bake this before harper would be home. not enough time to food style and photo shoot.

basically, i followed meg's directions, with a couple of tweaks:

1. for the cake batter, i used egg whites (all whites, in the carton in the egg section of your grocery store) instead whole eggs. i didn't want to run the risk of the batter taking on a yolky yellowishness.

2. for the icing, i used buttercream that i procured from the bakery at the grocery store. a) you get a take-out container of the stuff for the same price as a little can of betty crocker, b) it spreads so easily, c) it's white and fluffy and pretty, d) i'm too lazy to make my own buttercream.

3. she got a cup and a half of batter per layer; i got slightly more than a cup an a quarter. maybe it was the egg whites.

i made one batch at a time. the batter was mixed up according to directions, swapping out the liquid egg whites for the whole eggs. once the batter was mixed, i divided it into three bowls, 1.25 cups of batter per bowl. then i added in about 1/16th tsp of gel icing coloring and stirred until it was all worked through. if you want fainter color, use less gel color. and you can get these gels in any color you like ... i found mine in the cake decorating aisle at michael's. wouldn't this cake be pretty in a gradient of red to pale pink for valentine's day? pastels for easter? red, white and blue for july 4th?

anyway ... three bowls. food coloring. stir. then i sprayed the heck out of aluminum cake pans with pam for baking ... the pam that has flour in it. (ok, sidenote: that stuff smells GOOD!) the cake pans had the scalloped sides, which gave my layers their pretty shape. i poured each color of batter into its own pan and baked for, roughly, 12 minutes. while they were baking, i washed the bowls and made the next box of cake mix and got the next three colors ready.

once the cakes were done, i let them cool in the pan for about 20 minutes, then turned them out onto wire racks to cool. once they were all cool, i wrapped them in plastic wrap and put them in the freezer for about three hours. another hour or so would have been better. mine were still a bit warm and soft and fluffy ... stiffer would have been better.

one at a time, i placed a layer on the plate, spread some buttercream, added the next layer, more buttercream, etc. by the time i reached the last layer ... i was running low on buttercream. i asked marc if he could please run to the store for more. he suggested i leave the cake as-is so we could see the rainbow. hmm ... curious. sounds like he didn't want to drive a mile to the store.

but i went with it. frosted the top, and there you have it. oh - except it needed a little pizzazz. because it was a rainbow cake. way too subtle on its own. so once i brought harper up and surprised her with her cake (she was thrilled! then asked if it was chocolate.), i then handed her rainbow-colored sugar sprinkles and told her to accessorize the frosting. which she did.

remember how i said the layers should have spent more time in the freezer? well, here's why: the whole thing was very, very fluid. wanted to move. wanted to topple. hence the skewers you see in the picture. had i had the time, i would have created a little banner with patterned paper and bakers twine and decorated the skewers to make them look intentional. i had neither the time nor the idea on this particular day.

when i figure out how to make a chocolate rainbow cake.

lucky thing i had those skewers in there, though. as soon as i cut into the cake at the party, the whole thing wanted to fall over. so the skewers then became the anchor for cake kebabs. i sliced that cake up and served it on a stick, like some dessert at a brazilian steakhouse. exotic.

and really, those tall, thin slices of rainbow on a plate ... they were gorgeous.

it definitely took a little more work than a traditional two-layer cake, but it was so worth it.

try it. have fun with the colors. let me know if you do something fabulous when you make one!

You did good, Michele!!!

That was a colourful cake. I will be making which is most likely the same at that one. But I will just add some sweets to highlight the cake.

the thought of cake kabobs rocks my world. love!

Nice letter.. who wrote that?
The sweet delicious make my tummy satiated.
Yummy love it!