let me start by saying that of all the places i've ever been in my life, boston is in the top three. it's right up there with saugatuck, michigan, and rockland, maine.

lucky for me, red hat currently holds its annual summit in boston, which means once a year there's a possibility i can go and hang out. and that's just what i did two (three? has it been that long??) weeks ago. (if you want the cliff's notes version in photos, go here.)

marc and i flew out on a friday so we would have all of saturday through monday to hang out before his week of schmoozing and sitting in presentations started, and we had three days of awesome, fabulous, relaxing, fun quality time.

we didn't arrive until 3:30 p.m. on friday, thanks to a 90-minute delay in indianapolis, during which time marc worked (duh) and i read scout, atticus and boo: a celebration of 50 years of to kill a mockingbird. awesome book. once we landed and got to the renaissance hotel, we were starving, so we walked half a block to legal test kitchen and had what is probably the most amazing and delicious lobster roll either of us has ever had. we then returned to the room and promptly took a nap. when we woke up, we snuggled up to watch pirate radio (which was SO good. then again, how do you go wrong with philip seymour hoffman, bill nighy, and kenneth branagh, i ask you?), then at 10 p.m. decided to wander to the hotel restaurant, 606 congress, for what turned out to be a delicious meal: a perfect shrimp-and-avocado citrus salad, miso soup, seared char with morels, ramps, and fava beans for me, halibut with artichokes and asparagus for marc, followed by cranberry sorbet (mine) and pavlova with raspberries (marc's). delish. we rolled ourselves to the elevator and called it a night.

on saturday we decided to actually leave the hotel, which didn't, in fact, happen until about 11:30 (the bliss of being sans children!!). we walked to the wharf and had lunch at anthony's pier 4, which appears to be a national institution, given the amount of star power on the walls, photographed with anthony himself. politicians (think kennedys), celebrities, etc. we figured it must be good, and were convinced when we saw it was lando calrissian-approved. 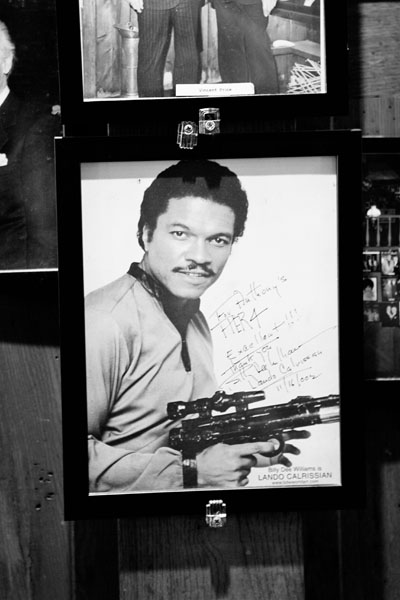 a fish-chowder-and-mixed-baby-greens-salad (me) and clam-chowder-and-lobster-roll-(yes-a-second-one) (marc) later, we were happy, full, and ready to go.

the remainder of the morning and early afternoon were spent poking through the boston fire museum and boston common. marc has never been through the park and it's one of my favorite spots in the city, so i wanted to make sure he got a chance to go. 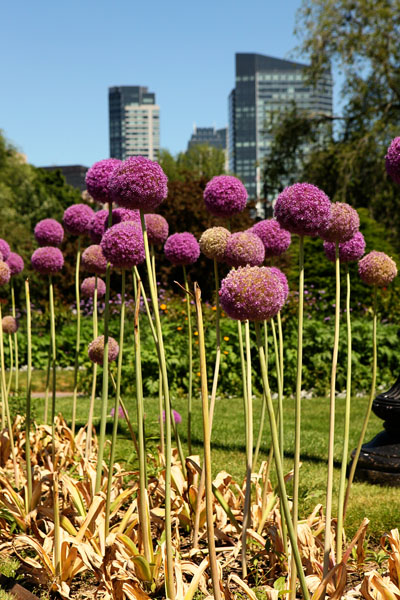 at this point we were exhausted and hot and miserable (it was about 90 degrees ... not fun for two northerners), so we found ourselves a nice quiet, air conditioned spot for some iced tea and cooling down before we set out for the highlight of the trip: taking in a blue man group show.

quick note: if you have never seen blue man group and the opportunity arises, GO! it is the most indescribable, awe-inspiring, funny, blow-you-away experience. and it IS an experience, not just something you sit back and watch. there is participation, and participating brings you into the entire realm of blue man. before the show began, there was a message board at the front of the theater with interactive, audience-response messages scrolling. first it asked a man named jerry to stand up, and we were to thank jerry for mapping the human genome. jerry was sitting right behind us and was laughing at the thought. good sport. then kevin was supposed to stand up. kevin was three rows in front of us, and kevin was being pointed out because he was just a regular guy and we were to make him feel special. then the message board wanted us to recognize that marc skinner hadn't updated his facebook status in more than three minutes. wait ... what?? oh, how i wish i'd gotten a picture of that!

after the show we were pushed into the lobby with the flow of people, and there the blue men stood for quick photos. marc got by one and wanted his picture taken, so i had to instantaneously oblige (no time for preparations. one of those instances that a nice little point-and-shoot with a flash probably would have been good.). 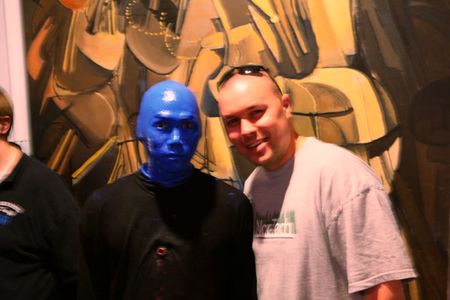 my camera must have piqued the interest of the blue man, because he proceeded to take my camera and go to town with it: 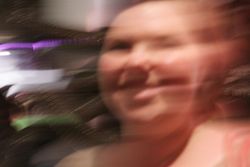 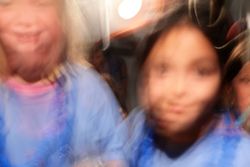 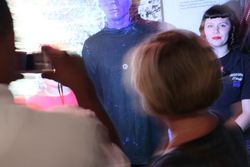 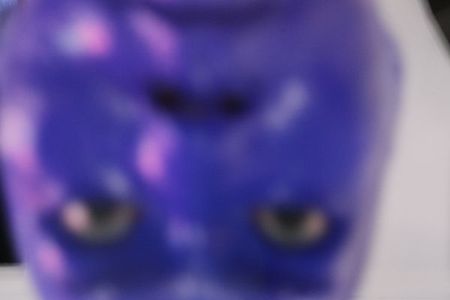 he then handed it back and we were on our way.

totally worth the price of admission.

after that we felt the need for even more crustaceans-on-a-plate, so we went to legal seafood. i don't remember what we ate - i think it involved salmon - but i do remember the lovely wine flight ... 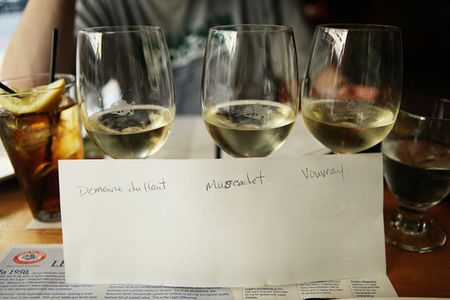 sunday morning came, and we met up with marc's cousin, danny, and his fiance, jen, and had a great lunch of oysters, ruebens, and salad at anthem near faneuil hall. we had a great visit, and a good laugh over me throwing a lemon in order to save a wayward oyster. slippery little devils.

after lunch, danny and jen dropped us off at the uss constitution/uss cassin young for some historical enlightenment. 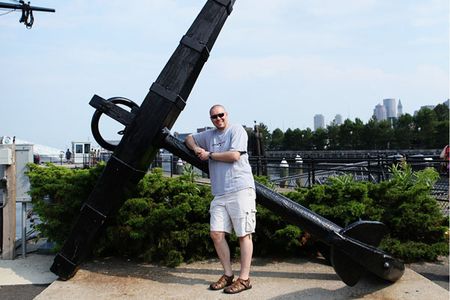 then it was back to the hotel - in pouring rain and booming thunder - for yet another shower (it was so HOT while we were there! and yes, i'm a whiner. it was probably only 80 degrees or so.) before marc's father's day dinner at morton's. i've never experienced morton's before, and marc promised me yumminess. he was right. but we should have split a meal; there was no way possible to finish even a quarter of the amount they gave us.

monday morning arrived way too quickly, and before i caught my flight home there was one more meal to enjoy (a roasted eggplant and portabella with goat cheese sandwich and smoked paprika chips for me, sdlt burger with rosemary pommes frites for marc at sel de la terre in long wharf) and then a trip through the new england aquarium. the 70-foot-deep tank that climbs up the center of the aquarium was amazing, but my favorite part was the jellyfish exhibit. i love jellyfish. 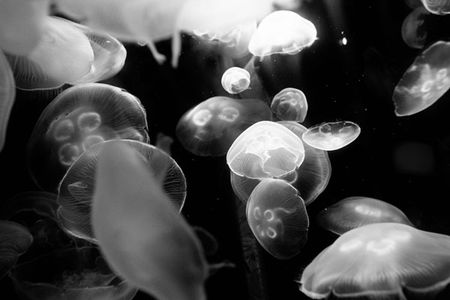 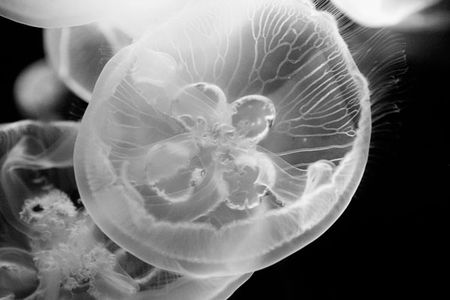 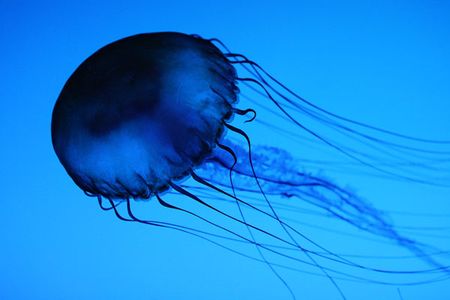 then it was time to fly home. it was so hard to leave boston marc, but it was time to get home to the kiddos. and ... there's always next year! we'd love to take the kids next time; i know henry would adore all the historical stuff, and harper would go crazy in boston common. and we'd love to spend some time wandering around harvard/mit ... that's something we didn't get to this time around.

if you need more, head to the photo album. and later this week: a photo shoot with wyatt!! he has quite the following here, so i know you'll want to stick around for that! 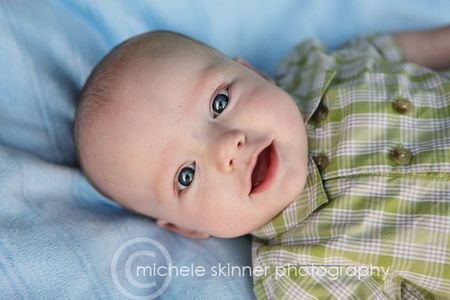 wow, sounds like you had a great trip and saw lots of cool things! great photos, as always!

michele, i popped over from august fields. you posted a comment on her kitchen post about her sink. just thought i'd give you my insight.... we switched from a double bowl (one side 1/3, the other 2/3 in size) to a farmhouse sink (single bowl) and it's absolutely fabulous! it's my favorite part of our kitchen redo. the sink is so much more functional than our old one. our double bowl had the garage disposal under the skinnier portion of the double bowl and it was dysfunctional. granted, with our farmhouse sink, i never have to fill up the sink with dishwater to wash dishes (most go in the dishwasher). when i wash large pots i just soap my sponge, go at it, and then rinse the pot. i've found that the sink is so large i can literally have dirty dishes stacked in half of it, and still use the other half while i'm cooking. just my 2 cents....pam

Legal Seafoods is still in my top 5 favorite restaurants. Glad you had a great time!

gorgeous pics, and i'm drooling reading about all of the food!!!!

You write well will be waiting for your new publications.

You write well will be waiting for your new publications.