in case you were wondering ...
dam.

where do the weeks GO?! it's february!! holy cats. 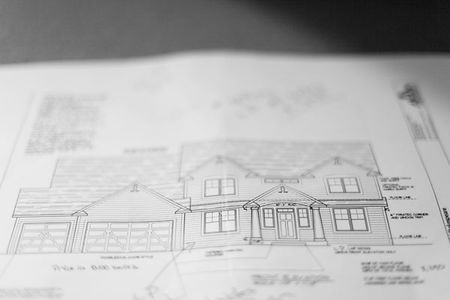 now that we're officially entering the one-year-or-so countdown to moving (the goal is to put our house on the market this time next year), it's time to make some decisions. marc and i have been having a lot of talks about the options, and given the fact that the lot has dropped significantly in price, and one of the house plans we've been considering also came in about 20k under previous bid ... and that was WITH changes we asked to be made, marc's language when we have these discussions has gone from detachment to saying "when" and talking in concrete terms.

on saturday, marc and i again walked through builder A's house ... the rep called to invite us to walk through the plan we're considering because it is being built for the spring parade of homes. now that we have a firmer grasp of the two plans we like on paper and have room dimensions of both for comparison, we thought it would be wise to see it in 3D again and make mental notes about the space in regards to the plan from builder B, which is technically the one we're leaning toward pursuing.

first: side by side of plans from builder A and builder B ... 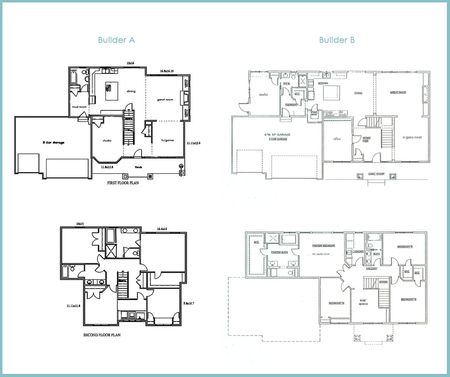 now, technically, builder B's plan is 300 square feet bigger that builder A's, but those square feet are primarily in the added room on the main floor that would be my studio, and secondarily in closing off the two-story foyer to create a homework/hangout room on the second floor, as well as eversoslightly larger bedrooms.

however, that room on the main floor is what's selling this house to us.

with builder A, the dining room would become my studio (thinking optimistically about my future career path here) and we would have to finish part of the basement to accommodate marc's office. with builder B, i'd have a studio with it's own entrance and bathroom ... no one would actually need to come into the house. because of that extended area of the studio and bathroom, it also increases storage for the mudroom and kitchen. also big factors. the bulk of our life is spent coming in and out of doors, preparing meals, and being together. i want the square footage to be in making all of that comfortable and usable and efficient. builder B just does that without any extra expense.

and that's that main thing that pushes B to the top: money. with builder A, the basic plan is already slightly ahead of builder B's in price. add to that needing to finish part of the basement, and suddenly we're having to make decisions on design standards vs choices. and when we initially went through builder A's house, there was a great storage room added off the mudroom ... to the tune of 10 grand. so, no. i think the writing is on the wall for builder A, even without us liking B's plan better.

so why am i still pro/con listing?

these are nice houses. nice.

with everything going on in the world, that seems extravagant. i feel guilty. i've never had anything so nice, and i never anticipated having anything so nice. it never occurred to me that i could possibly one day put everything i want in a house and make it perfect. and regardless of which plan we go with (if we do indeed do this), it will be expensive. that makes me gag a little.

that being said, it will be the house we are in until we shovel off to the nursing home, barring any unexpected moves from marc's career. once we are in this house, and it is built to our specs, we won't have to worry about or save for house stuff ever again, pretty much. we can put all of our energies into savings for college, harper's wedding someday, retirement, life. it will be one major thing off our plate.

but ... i feel like we should be able to make do with less. (even though right now we are in 2200 sq ft and walking all over each other, and our house has zero storage.) why do we need to add another house to the market? (because if we don't, someone else will anyway.) couldn't we just buy something cheaper and then remodel? (and add waste to the system? not to mention, the cost of remodeling will end up making the house equal in cost to just building in the first place. and also, because we'd have to choose from what is on the market when our house sells, and who knows what neighborhood that might be. this lot is amazing and the neighborhood is perfect ... just what we envision when we think of an amazing place to raise a family.) maybe we should just sell everything and join the peace corp and raise our children to be children of the world and go off to do humanitarian work? (uh, do i really think marc would do that? right.)

i guess it boils down to three things: meeting with the bank on friday, selling our house, and getting over feeling guilty. marc works hard. we do everything as right as we can. we're practical. we don't splurge. we're not giving up anything by doing this. we'll have at least 10% by the time we close. i'm getting my life back, and the ability to start contributing financially, now that the kids are older.

the pros are there, now we just need to jump.

I know, it's such a hard decision...just remind yourself you can't go wrong with either, right??? (:

ahhhh.. Loved reading that. YOU DESERVE IT! That is what you need to think of. As far as which... that's a toughy.. but you will LOVE wither.. a s you already know!

Bet you didn't know how much I loved reading this stuff! :) But now you do because I gave you a blog award! :)

Sometimes I think that our own offenses should seem so much less heinous than the offenses of others. I often feel confused.

Likewise, a lot of creatives are going freelance because agencies don't want to pay account handlers / planners / project managers. Speaking to the person who does the work is appealing, hence the increasing number of tiny, new creative shops.

Friend is a friend is. Friends can indomitable spirit is the friend's friend. Rain, Had a friend can stir. Wealth does not necessarily is a friend, But a friend is wealth. So I agree with you, We must friendly to our friends.

Fantastic read, i was chatting to a friend the other week about the same subject and gave her this article to visit.