pretend it's last weekend.
i never should have looked.

so much for that.

holiday spirit, that is. a december of peace and joy.

i'm not ready to throw in a "bah humbug," but seriously. we're four days into december and it sucks so far.

our cat, mario, stopped eating much of anything last week. we attributed it to marc buying a new kind of food, lots of chaos getting ready for thanksgiving, changes in the home environment. then mario peed in the laundry room twice (which, sadly, is not a new development), which i chalked up to all the cleaning and rearranging i did in there the previous weekend. mario has always been finicky and touchy, so changes in his world seemed like a logical explanation.

jump to this week: he's not eating at all now, not drinking, sleeping all day. he's not himself. i took him to the doctor on monday ...  six hours and $250 later, we know his blood work is normal, his liver function is normal, his kidneys were slightly off but within normal limits. he received some fluids and an appetite stimulant and sent home.

wednesday, he was still no eating, not taking the meds, not letting us get food into him. another hour and $150 at the vet, and we're no closer to an answer.

so what to do about mario? spend the money we really don't have right now (more on that in a minute) to keep testing? keep watching him and hope it leaves his system? something worse? and if he doesn't get better, how can we leave him alone as much as will be the case over the holidays? and do i really want to make him the responsibility of the 12-year-old cat sitter?

yesterday morning, on top of mario, i was driving out of the neighborhood to get henry to school, and my car didn't stop. at a stop sign. turning onto a four-lane road. my car slid into the path of an oncoming car who, thankfully, had the presence of mind to swerve away from us. my traction control has been getting dodgy for about a year, but we had brake work done, got new tires, figured it was all okay now. apparently not. we had a dusting of snow, so i thought maybe there was some black ice or something and tried to turn on the car's four-wheel drive. it blinked and blinked and blinked ... and never engaged. and the rest of the day it blinked and blinked ... and wouldn't turn off. in the afternoon, when it was time to pick up henry, i got in the car, the light was still blinking, and i tried to back out of the driveway. as soon as i started to turn, the wheels locked up and i couldn't go anywhere. i couldn't drive, marc was on a conference call, so i had to call henry's school and tell them to hold him until we could get there. sigh.

marc took his call on the road and got the kid, and i called the dealer, explained the situation with the car, and that evening when marc got home we took it in. prognosis? something in my front alignment is screwy, the part won't get here until monday afternoon, it may *also* be anti-lock brake-related, and so far the estimate is $800.

so the cat is sick. i'm without a car until monday night or later. marc leaves for wisconsin for several days on monday. not sure how i'll get kids to and fro. and the money ... three weeks before xmas ... and we still don't have a diagnosis for what's buggin' the cat.

so far my december daily entries are as follows: 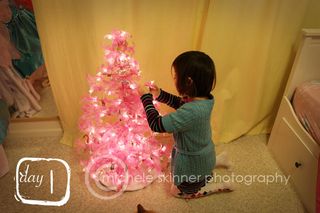 harper decorated her tree, and the holiday spirit is among us. 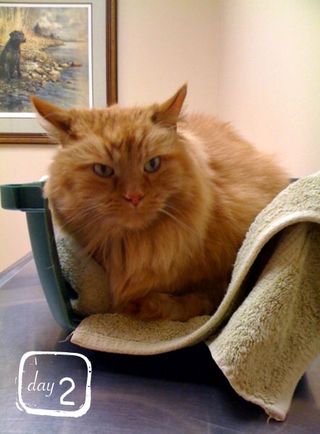 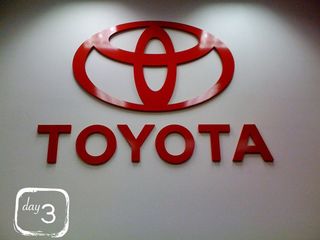 then my car kicks us over the edge. upside? henry won a life-sized greg heffley cut-out at school yesterday and decorated him for the holiday season.

his excitement over that, and his creativity getting the wimpy kid all holiday-ed up, remind me that it's the little things that make the season bright.

we just need to focus on the little things. the big things are too big right now.

girl... I feel your pain! A landscapers life means that December is the WORST month of the year followed very closely by January... and naturally its even harder this year because of the economy. I just want to close my eyes and pretend that there isn't a December... think anyone will notice if I flip the calendar to February?

Ok so a pre-pay on the cd is in order? I love the santa Whimpy kid.