in honor of memorial day ...

i admit that i have a very soft spot for our military. true, that a liberal like me probably wouldn't normally say that, but there is a long tradition of serving our country in my family. all three of my grandfathers fought in world war II, my dad and uncles served during vietnam, my cousin was a marine, my sister and her husband are both air national guard, and the list goes on.

i get the pride. i get the honor. i get the sacrifice. i may not always agree, but i could never be anything less than proud and humbled by what my loved ones and all others who serve are willing to do in the name of loyalty, duty, country.

the thought of what our troops do, though, didn't occur to me too much until i met marc. he is a huge military buff and wanted to enlist after high school and go to sniper school. while i do admit that would have suited his personality quite well, i'm happy that he didn't. we never would have met and our lives would have been radically different. and for his sense of peace, i'm glad taking out enemies isn't something he has to deal with spiritually. 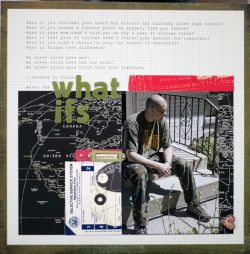 i reflected on marc's military dream for my book, and the process of making the page about made me cry. it really hit me that our lives intersected by such a thin margin, in many ways. but it also made me think that i am so proud of my husband, who was so willing to join that group of men and women who dedicate their lives to something bigger than themselves.

so while memorial day might be a holiday all about the cabin, the boat, the beach, the bbq ... it is also about something so much more important. take a moment to send a thanks and prayer to all those who have served, who are serving, and who will serve in the future. they carry a load the rest of us can't imagine bearing and deserve our support and respect.

Thanks Michele...well said. We love you.