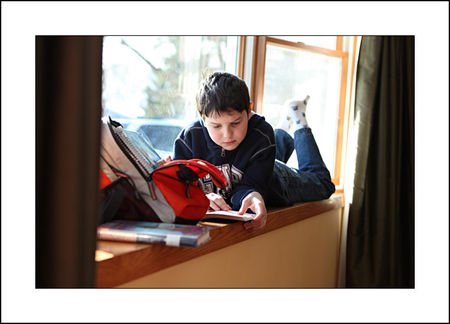 this little boy squirmed into the world, and all i could do was grab his toes to make sure they were all there. (i knew i would be induced early, and because of that i was having stress dreams that his toes weren't completely formed yet.) i don't remember kissing him or crying or feeling anything other than relief that the hard part was over. but then the nurse placed him on my chest, and he lifted his head and looked me in the eye, and immediately i felt not like the mother of a needy little infant, but that i had given birth to my equal.

that probably came in handy later on when i went into such a deep post-partum depression that i literally have only bits-and-pieces memories of his first eight months. henry was always tough, was always stronger than he should have been, and was much more patient with me than i was with him.

marc and i were always sure than henry would be His; that they would be so alike and be in their own little orbit of two together. and on some level i was okay with that, because i knew little boys wanted to be like Dad. but henry is so very Mine, on just about every count. his temperament, his emotions, his love of reading anything and everything ... i actually find very little of marc in him sometimes. he doesn't even really look like marc; he looks like me and marc's brother, oddly enough.

and yet everything about him is 100% henry. everything he says is parenthetical:

"can i tell you about this ship i built? this is the gun turret (well, it isn't really a gun ... it's a photon cannon ... but it's mounted like a gun) that swivels all the way around ..."

all. day. long. and about everything. even jokes.

and speaking of jokes, his sense of humor is so him. he doesn't just tell a joke or laugh at something funny; he conceptualizes, produces and directs little "scenes."

"mom, what if i had walked in the door, and there was something slippery on the floor, and i stepped on it and slid all the way to the back wall (well, pretend the chairs weren't there, because then it wouldn't work) yelling, 'i'm hoooooooommmmmeee ... waaahhhhh!!' wouldn't that be funny?"

he is insanely smart, and incredibly lazy. every project is half-assed, every assignment is done to the bare minimum. (which, actually, is very like his dad when it comes to anything non-computer-related.) he can't use his imagination without input from others. "pretending" in his world equates to sound effects and screeching. yet he takes great interest in whatever i'm reading or talking about, and he is learning to build lego ships at the knee of the master and is getting quite good at thinking about the mechanics and logic of it.

he would eat fruit all day long if i would let him. he has a nervous twitch that makes him itch at the edge of his nostril all day long. he has long, creepy fingers. he sometimes talks like a 40-year-old. his favorite thing to do is lie on his floor with the chipmunks cd playing on his little radio and thumbing through a magazine or reading a book. he loves pokemon and star wars and mythbusters. he pretends to hate anything his sister does, but then he'll snuggle up with her while she's watching a barbie movie. he searches for star wars and lego and lego star wars and weird al clips on youtube, then bookmarks the ones that he thinks are hilarious or cool. and he makes us watch them.

it is hard to believe that he's been in our lives for nine years, and it's even harder to believe that in nine more years he'll start to move on into his own life. because no matter what, i'm not ready for that. i love this kid so much it makes me cry. he has changed every molecule of the air around me, every cell of my life, with his very existence, and i will always, always be grateful to him for that.

he is my son, my henery-benery, my pork chop. and today is his birthday.

I love how life can give you fuller, memorable moments as your child grows- I understand the PPD thing, and I appreciate being able to realize my DD changing and maturing. Happy Birthday to your DS!!!! Have a great day!

Beautiful thoughts. All the while I was reading it I thought what a lucky kid. Please wish Henry a lego-filled happy birthday!

Happy birthday to Henry! My DS just turned 9 also and some of this sounds just like him!

I loved this post. I feel like I know Henry, even though I've not seen him since he was about 18 months, toddling around the MSP airport with his somewhat frazzled mom running behind him.

When my Grace (in uturo at that visit) turned 6, a friend of mine said "Just think. A third of the time she'll be under your roof is over." I didn't like to think of her growing up that way -- a third over!? Pshaw! She'd always be my baby!

For you, it's half-way over, these years he's so geographically close to you, and abiding by your rules and feeling your influence on a daily basis. Judging from what you've done with the first nine years, I'd say the next nine will be fabulous too. ((hug))

Happy Birthday Henry! You have a great mama, I hope you appreciate her every day. :)

So sweet. I'm glad that you captured henry's spirit. Happy "BIRTH" day to you Michele.

Love your written detail..Happy birthday to Henry and kudos to you and your hard work so far.

this post is so beautiful. michele, you brought tears to my eyes.