we interrupt this blog for a severe weather alert ...
monday funnies

i'm so over trying to find the time to blog everything that's taken place this summer. so, cliff's notes version will commence ... NOW.

spent day 3 of the trip walking around with my friend suki, whom i've known for years on a private scrappy/photography/chatty message board. we went on a swan boat ride, i took pix of her gorgeous daughter tess playing on the duck statues in the public garden, and ... i have no pix. they were never downloaded. and i didn't know that when i reformatted my card and stuck it back in the camera.

i received this month's issue of popular photography and read a review of data recovery software that has been known to recover info off reformatted disks ... even AFTER the data has been overwritten ... so i'm gonna check it out. i'll report back.

while we were in boston, the most amazing thing happened: the celtics won the nba title. i'm not a huge basketball fan, but i'm a huge fan of being in the right place at the right time and taking advantage of it! so on thursday, i headed into the city with marc's uncle, cousin, and cousin's gorgeous girlfriend to watch the celtics roll down the street on duck boats. it was amazing. and even better: kg is now a celtic. all the years we watched him come soooooo close with the timberwolves ... and when he finally wins, i was there to see him celebrate. that was pretty darn cool. 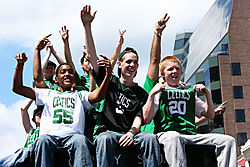 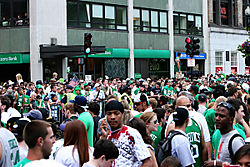 and i've finally put up a (nearly) complete album. if i ever recover that day and a half of photos, i'll add them and let you know.

after boston, the kids and i went to my parents' in huntington for a week while marc was in dallas. we went to my high school friend erin's house so the kids could play in the pond with her kids, as well as those of another high school friend. it was like old home week. then i got to meet one of my college best friends and HER kids for a day. then marc returned, we drove home, and breathed for a few days.

until the storm hit. (see previous post.) power returned 48 hours later on saturday, and at 7 a.m. sunday morning i got the call about my grandma. so BACK to indiana we went for another week.

it was bittersweet ... hanging out with all the aunts and uncles and cousins. it was just like old times, and there was much laughing and talking. but for pretty much all of us, it will be the last time we will all be together in grandma and grandpa's house. that was sad. i realized every time i went up and down the stairs that i will always remember the sound of them. very sad, but yet grandma's funeral was so amazing. she was an incredible woman, and everyone in the church knew that and cherished that. 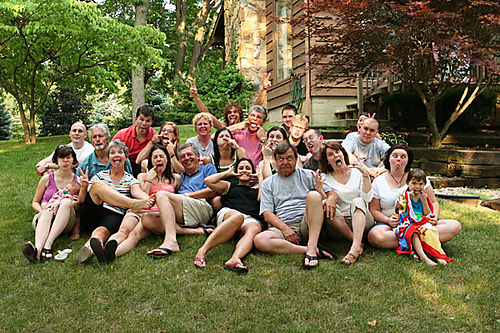 on the way home from indiana, marc and the kids booted me out of the car in chicago so i could attend cha (the craft & hobby association trade show). i was meeting my dear friend katrina for 36 hours of walking the show floor, seeing all the soon-to-be-released scrappy goodies, hanging with friends and making new ones, and laughing until our abs hurt. notice i didn't mention sleeping ... there's a good reason for that.

honestly ... just go read katrina's recap. i would only say the same thing, minus the airport delays. ha. it was a great weekend ... the only thing missing was my lovah, catherine, who was missed dearly.

okay. there. done. now i can get back to blogging as things pop up. keep your eyes peeled this week for entries on ... some seriously cool news about a new assignment for memory makers (coughcoughcontributingeditorcough), a new toy for marc, and insanely delicious and EASY enchiladas, assuming i remember to thaw the meat and make them this week.

i'm all about the diversity, people.

wow! you've been busy! and what's that about Memory Makers?

You are a great blogger! Very fun to check in here. You have had a busy summer, but I suspect it has been very wonderful too!

Glad your back.
Grandmothers are the most amazing people.
Happy CHA was fun for you!

Hope to get together and laugh soon.

Hi Michelle! I had SUCH a great time meeting you and hanging out. It was some crazy fun! Look forward to the next time we meet and do it all over again.

hmmmm but no mention of PIE ... me thinks something is missing :) xo xo xo

I am so glad I got to meet you at Cha! Your summer sounds as crazy busy as mine does. congrats on MM!

Weird, I always thought the sound of the stairs was something random that I always would remember... that and the smell of the cedar siding, which I never realized was the reason the outside of the house smelled that way until Abe pointed it out this last time.