and no, i'm not pregnant. heaven forbid. if that was the case, there would be a certain urologist in edina, minnesota who would be given the opportunity to sew his own back on.

i've always been nuts for houses. when i was little i'd steal my mom's country living magazines and reproduce the floor plans on a legal pad, and then draw in where i would put furniture and makes lists of what colors i'd paint each room. yes, so geeky. i know.

as i got older and discovered the paint chip aisle at the hardware store, my fun increased two-fold.

and now it's all in high gear again because of this idea of moving. we're fairly done with doing stuff to our current house, now that the bedroom is perfect and just before we start in on the bathrooms. so of course it's time to start redecorating mentally homes i don't even live in. yet.

while in indiana last week we met with a realtor and took a tour of the indy suburb, carmel. we were both so impressed. a beautiful town center where they hold july 4th parades and santa visits each christmas. an amazing new park and rec center, complete with an outdoor pool and water park, is just being completed. a hip new shopping district with great stores and restaurants. there's definite promise there. and then we looked at houses.

for what our 2400 sq foot ranch in minneapolis cost, we could live in 4000 sq feet of new house with amenities and sought-after school districts. seriously.

then marc and i saw this house: 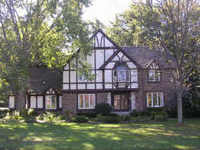 4400 square feet of pure possibility. granted, it would take a good wad of cash to fix up the downstairs, which is way too chunked up and wearing the finest in 1980 decor, but marc and i both walked through it giggling. we could see it's potential. and it's priced low in a neighborhood of homes that can sell for up to a million dollars ... we'd be buying money with this house. it's been on the market since january, and we decided then and there that if it's still on the market this january, we'll take it as a sign that we're meant to have it. and then the playing around with knocking down walls and replacing flooring can commence!

and today i saw another sign and the nesting urge kicked in again.

there is a blog i check in on semi-frequently because the author, susanna, is a fellow scrapper, but more than that she is always colorful and inspiring. today i popped in for the first time in awhile and saw that she had finally finished a dollhouse that she's been working on for months. and the dollhouse looks amazingly like the house in carmel that we are interested in. coincidence??

i love dollhouses ... it's a fascination that began with the barbie dream house when i was five, and i had more fun decorating it and setting barbie's table than actually playing. then in sixth grade i took a field trip to the indianapolis children's museum, where i wandered into the miniatures room and was hooked. all things miniature make me smile, which is another reason why i love susanna's blog so much. she makes her own and sells them in an etsy shop. one day i'll snatch up some stuff just to tuck away and bring me some happy.

for now, i guess i'll go wade through months of scrappy supplies that need to be sorted and filed and organized. it's not daydreaming about gutting a house to make it amazing, but it is a sort of nesting, in a very small and way-past-necessary way.